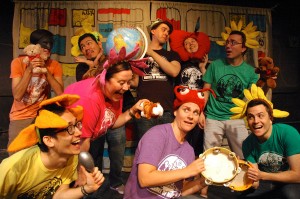 “That’s Weird, Grandma…”  You know you’ve heard the phrase, though just what it connotes has always remained a tad unclear.  (Sometimes it’s just enough to have a witty catch phrase to tickle the imagination.)  So I attended last Monday’s production of Barrel of Monkeys’ “That’s Weird, Grandma” to see what the fuss was all about.

Barrel of Monkeys is an arts education group, now in its sixteenth year, and “That’s Weird, Grandma,” now in its twelfth year, is a showcase, variety show and veritable cavalcade of comic sketches inspired by the creative writings of underage, non-voting, non-imbibing, developing citizens. In other words, children.

The educational theater troupe conducts in-school creative writing residencies to teach children the joy, skill and structure of autobiographical creative writing. They then parlay the fruits of their labors into a weekly one-hour revue, stubbornly staged in the decidedly uncommercial Monday night 8pm time slot; this is the first clue that this is not a normal theater company at all. And yet it’s possible to have a truly theatrical experience while attending the decidedly unique and infinitely varied “TWG.”  The show changes weekly and the talented cast of teacher/performers are delightfully adept at dramatizing the childish (in a good way) stories to entertaining and hilarious effect. Still, the show cannot be reviewed as much as it must be described: to critique a mission-defined theater company that has the tag line “Kids write it. We Do it. World saved.” seems ill-mannered at best and positively churlish at worst.

Most importantly “TWG” is a concept, a culture and a working laboratory for both the child authors as well as for the older (but still youngish) adult performers. I have a feeling that many a Chicago theater rat has passed through the doors of Barrel of Monkeys in order to hone their personal theatrical stylings and group improvisational skills. And “TWG” depicts a witty, fresh and fun-loving world—a world that is, in fact, more fun than, well, a barrel of monkeys.  It’s a delightful and unique experience for the attending audience and makes for a great, if unusual, Monday night urban adventure. 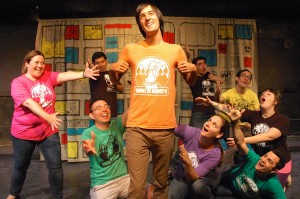 The uniquely simple child-themed sketches put the “id” right back in kid as we witness the zen koan logic and appetite-based directness of childhood re-enacted. Moreover, the inventive adult performers draw on musical comedy, mime, dance and improvisation to flesh out and vivify the childish themes. On the night I attended some favorite sketches included “My Teddy Bear,” “It Was a Boy and He Was Mad,” “Attitude,” and “Flower Arguments.” You can’t make this stuff up—but kids do! And it’s often quite funny and touching to see their guileless writings reenacted by seasoned theater professionals: the comic duality between the age of the adult performers and the apparent simplicity of the material creates an oddly poetic depth which leads us to our own nostalgic ruminations on the fleeting and exclusive world of the developing mind…. Ahhh childhood, a rare and exotic concept in a culture suffused and governed by imagery for adults!

Barrel of Monkeys has a win/win mission and a winning formula. And this fall they expand their repertoire to include guest artists such as The Hypocrites, The Neo-Futurists, Bailiwick, Noah Ginex Puppet Company and Manual Cinema in their already accomplished company.  It’s a smart move and one that should expand the reach of the already long established theater troupe.

Moreover, as the show changes weekly, it’s possible to have a completely different “That’s Weird, Grandma” experience on any given night. With any luck, Barrel of Monkeys, already an institution, will keep delighting and instructing both children and adults with various versions of “That’s Weird, Grandma” for many more decades to come. (Kaelyn Storme)