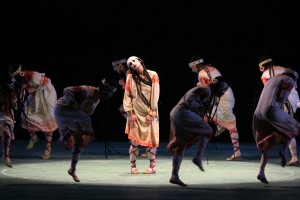 The Joffrey calls upon all their considerable resources to stage massive, demanding works by three Russian greats. The centerpiece of the evening is the company’s authoritative reconstruction of Nijinsky’s legendary, riot-inducing “Le Sacre du Printemps, ” which still feels absolutely raw and primal even 100 years after its premiere. The rest of the program holds strong with Balanchine’s “Allegro Brillante”—a sweeping full-company piece featuring bearishly difficult solo sections for the principal ballerina—and two works by Yuri Possokhov. “Bells” is a gorgeous half-hour work set to seven Rachmaninoff compositions that move sweetly through moods and images, and a real treat will be Possokhov’s duet “Adagio,” created expressly for the Joffrey’s remarkable husband and wife team Temur Suluashvili and Victoria Jaiani. It’s the first time the duet will be performed in Chicago so hold on to your champagne flutes: these two dance with connection and skill that is pure poetry for the eyes and heart. (Sharon Hoyer)