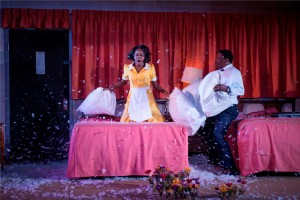 Has any American been so universally idolized in the last century as Martin Luther King, Jr?

On April 3, 1968, five years after “I Have A Dream” and almost a dozen years since the first of his three appearances at the University of Chicago, King delivered a speech in Memphis in support of striking sanitation workers that concluded:

“We’ve got some difficult days ahead. But it doesn’t really matter with me now. Because I’ve been to the mountaintop. I don’t mind. Like anybody, I would like to live a long life. Longevity has its place. But I’m not concerned about that now. I just want to do God’s will. And He’s allowed me to go up to the mountain. And I’ve looked over. And I’ve seen the Promised Land.”

Afterward, King returned to his regular Memphis lodging, the Lorraine Motel, where he spent the night in rather meager accommodations. The next day, he was assassinated on its balcony.

With “The Mountaintop,” playwright Katori Hall has written a fable about King’s final night at the Lorraine. An uneventful evening, in Hall’s construction, where the only real action is the reverend ordering a cup of coffee and its delivery by a comely young maid (based on the playwright’s then-young mother, who was prevented from attending King’s final speech by her own protective mother), who he cajoles into sharing a cigarette and a conversation and…

It’s a crafty, magical work that manages to puncture the King myth without deflating it. Hall’s King is “just a man,” with holes in his socks and holes in his immortal character: he not only smokes, he drinks, he swears, he flirts. But beyond his only-human transgressions, he struggles with his growing sense of doom, and his concern about the future of his life’s work. Here, his final speech was not just foreshadowing, it is prophesy, and his last night on earth, as Hall imagines it, moves from the most base of earthly concerns into another realm entirely.

Director Ron OJ Parson seamlessly guides the play’s transition out of its grounded realism with an assured hand that avoids contrivance or absurdity. He’s helped by scenic designer Scott Davis, who’s crafted a perfect rendition of the interior of a sixties-era downscale motel that amplifies the foreboding sadness that floats in the very air from the curtain’s rise. And lighting, sound and video (Sarah Hughey, Victoria Delorio and Mike Tutaj, respectively) play increasing significance over the evening’s ninety-five minutes. 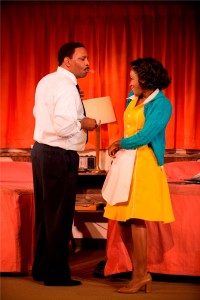 But this two-hander lives or dies in its casting, and here it soars. David Alan Anderson channels Dr. King in physicality and in a sense of presence—I swear I could almost smell his feet in the middle of the theater when he took his shoes off. His gregarious voice and infectiously genuine attitude makes King’s private persona a partner to his public charisma. Anderson would make a tough actor to face off even if he wasn’t playing MLK, but Lisa Beasley’s Camae stands tall in her playful sparring with a man she sees as big as The Beatles but not too big to have her take him down a few pegs. It’s easy to see why the weary reverend is energized by her presence.

The course of their conversation ranges from whether King should shave his mustache to his philosophic differences with Malcolm X to one uproarious scene where Camae imitates King’s oratory style. (It’s a nice writing device by Hall, to appease a natural craving for some of the good doctor’s vocal panache without resorting to a contrived recitation on his part.) Throughout, the enigma of King plays out—was he, the leader of an American crusade, truly interested in the concerns of a young, seemingly uneducated maid, or was he just interested in getting at what she playfully calls her “wings”? In Katori Hall’s world, the answer is both. And both is OK. Even the greatest of men is still just a man. (Brian Hieggelke)