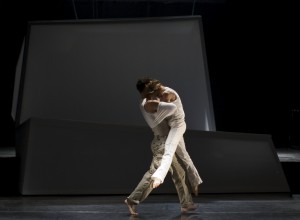 It’s been proven that people are more inclined to sort out their recyclables and throw less in the garbage if the can is labeled not “trash, ” but “landfill.” One word powerfully evokes a reality most of us can choose not to confront: the ever-growing mountains of waste our modern, convenience-based lifestyles have built. Carrie Hanson became interested in the subject because of one landfill in particular: the Fresh Kills Landfill on Staten Island, a structure that towers higher than the Statue of Liberty and is large enough to be seen from space. “I was interested in the ease with which we send things away and the invisibility of it,” she told me at a rehearsal for the restaging of “Monument.” “In this work, our relationship with materials translate to relationships with other people.”

First staged in 2008, “Monument” paved the way for Hanson and her company The Seldoms to create a series of issues-based dance theater works that address some of the most urgent questions of our day: consumerism, economic collapse and, most recently with her 2012 piece “Exit Disclaimer: Science and Fiction Ahead,” climate change. There’s no trace of preachiness or doom in Hanson’s approach to these rather bleak subjects; “Exit Disclaimer” had a healthy dose of visual and verbal humor and “Monument” works primarily in the abstract. There are a few pointed images—seated dancers pantomiming tossing objects over their shoulders, dancers plunging their hands into each other’s pockets, the Statue of Liberty gagging with such violence she’s unable to hold up the torch—but Hanson leaves ample space for the imagination. A memorable sequence in which a white t-shirt is folded, twisted and worn about twenty ways has been read vastly differently. “The t-shirt in Western culture bears messages,” Hanson said. “It’s a way we embrace our liberty, how we choose to dress. For me, that part was about choices. Some other people have seen it and thought ‘she’s recycling.’”

There is a fascinating body language of disgust that forms the foundation of several sequences in the piece, broken up by muscular solos and aggressive partnering. There’s very little text in “Monument,” Hanson allows the viewer to take away from the piece what they will. (Sharon Hoyer)