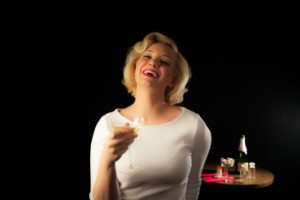 Giants walk the earth. We tend not to notice. Until they fall.

The explosion in communications technology that occurred in the twentieth century created a truly unprecedented new popular culture. Suddenly we had the ability to see people on flickering screens all over the world and imagine we knew them, even if all we saw were deliberately constructed images.

Marilyn Monroe is an icon occupying a rarefied space with precious few others (John Wayne and Elvis Presley, perhaps). These fully constructed demigods don’t seem quite real or human to us. But of course they were.

Gallons of ink have been spilled exploring Marilyn Monroe’s unique and enduring appeal. It’s certainly nothing as simple as a hot blonde with an impressive bust—if that were all there was to it hundreds, if not thousands, of actresses would be iconic. Her greatness came from the sly and impish sense of humor that belied her dumb-blonde image and from the paradoxical interplay between her comedic skills and the pathos of her sad and lonely life.

Amber Hargroder’s one-woman-show “Monroe” is an exploration of that interplay that, like Monroe herself, is at turns thoughtful, funny and deeply poignant. Hargroder sets her show on the last night of Monroe aka Norma Jeane Baker’s life. Norma Jeane is surrounded by alcohol and pills. “I can stop anytime I want to” she tells us in her breathy Marilyn voice, “Only I don’t want to, especially when I’m blue.” This is one of the first lines of the play and we already have its essence, a self-deprecating witticism drenched in overwhelming sadness.

Hargroder’s show is not an act of hagiography; she unflinchingly explores Monroe’s flaws, the darkness and rage that resulted from mental illness. Her Monroe is likable but occasionally quite frightening. Choreographer Nora Best helped Hargroder master the patented “Marilyn moves,” making them look easy, but her vocal impression is only adequate. She only uses the “Marilyn” voice when she’s talking to other people and employs a more conventional “Norma” voice when talking to the audience.

Norma tells us how she got to this point. She relates her awful childhood in a series of foster homes where she was beaten, “worked to death” and ultimately sexually molested. She asks the heartbreaking question so many victims of that monstrous crime are moved to ask: “Do I really bring it on myself?”

Her ambition and talent take her to the top, but she’s forced to change her name. Part of the reason this chafes is that her childhood enemies are less likely to know how far above them she ascended. While most movie-star personae were crafted by the film studios, Hargroder makes it clear that the “character” of Marilyn Monroe was entirely Baker’s own creation. Hargroder presents her as a very savvy businesswoman, once again refuting the dumb-blonde stereotype.

And of course, Norma tells us about the men in her life. Joe DiMaggio, Arthur Miller, Frank Sinatra and John F. Kennedy, to name just the A list. If women’s sexual relationships were viewed as “conquests” the way men’s are, we would properly stand in awe of Monroe’s romantic achievements. The leaders of their fields: the great athlete, the great writer, the great singer and the great statesman, all hopelessly in love with her. Like the rest of us. Yet they all mistreated her, distancing themselves from their own lust by calling her a whore.

“Can sex be innocent?” she asks at one point. In a world which even now mostly regards sexuality as something corrupt and dirty, Monroe’s career suggested that it could in fact be innocent and good. It was a revolutionary act, one whose implications have yet to be fully realized. Hargroder’s writing and performance very skillfully capture the fragility, brilliance, beauty and ultimate madness of this fallen giant. (Rory Leahy)