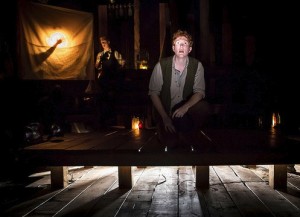 “The Old Man and the Old Moon” is a studied, artful exercise in whimsy and innocence that’s as successful as they come, if you like that sort of thing. This is one of those shows that will appeal deeply to some audiences and alienate others, all depending on how charming you find a wide-eyed, sincere ethos and a flamboyant handmade aesthetic. New York’s PigPen Theatre Co., as a company in residence at Writers, teams up with Stuart Carden to present a slightly edited version of their hit 2012 play to Chicago. “The Old Man” is a fairy tale about a leaking moon, nautical misadventures, fake identity, memory, and marriage (other quirky elements include steampunk dribbles, life in the belly of a fish, and mystical cities);  the play’s major defect is its sprawling, crowded plot, which even at under ninety minutes makes it feel like three or four fables mushed together. But what it lacks in structure, the show makes up in exquisite, inventive shadow puppetry, feel-good songs played by the cast (not unlike whaling songs covered by Mumford & Sons), and tirelessly vibrant acting by the seven members of the troupe. Ryan Melia in particular stands out as the titular Old Man. (Monica Westin)