by Brian Hieggelke
September 24, 2013Filed under: 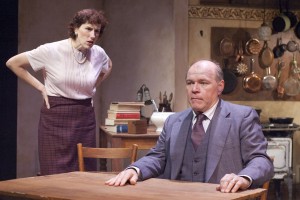 It’s probably a foreign notion to younger audiences that just a generation or so ago the idea of a television food celebrity was as alien as a six-eyed martian. That such notions as locavores, farm-to-table cuisine and even foodies themselves would have sent anyone conjuring them to the asylum, as the prevailing attitude, especially in American kitchens, was one of escape. Escape into the expanding arms of the corporate food culture that championed convenience and simplicity above all, especially over taste and quality of ingredients. That Julia Child accomplished all that she did, in the face of such powerful prevailing trends, is a testament to her fortitude and insight. She was an American revolutionary.

Though it’s not essential to comprehending the show, understanding this enriches the experience of watching the outstanding production of “To Master the Art” at the Broadway Playhouse as it traces Child’s coming of age in the kitchen. A commercial remount of TimeLine’s sold-out hit from 2010, this production returns six of the original ten cast members, most notably Craig Spidle as Paul Child and, above all, Karen Janes Woditsch as Julia Child. As she did then, Woditsch inhabits Child in an uncanny manner; her voice, her mannerisms, her entire presence evoke the food legend. Director William Brown has ably adapted his staging for the much-larger but still reasonably intimate Broadway Playhouse space and his script, co-written with Doug Frew, garners a regular stream of laughs as it recounts the Childs’ journey to a postwar Paris, where Julia discovers her calling while Paul discovers the crushing weight of working for the US Government in the time of burgeoning McCarthyism.

The play’s original production was close in time to the release of the 2009 film “Julie & Julia,” but that comparatively inferior production is less proximate now (Meryl who?), and this show will flourish on its own merits. I had some concern going in whether I’d cotton to the show as much in this much larger space and was pleased to discover I certainly do. It remains a feast of fun and discovery. (Brian Hieggelke)