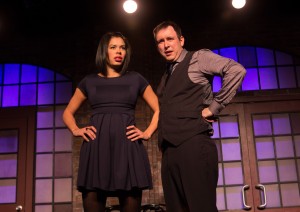 As a sketch toward the end of this gentle send-up of Chicago makes clear (with a self-referential punchline), Second City has been making audiences laugh (and casting directors take note) since 1959. And “What the Tour Guide Didn’t Tell You” is not so much a standalone revue as it is a “best-of” collection of sketches about Chicago from the last five decades or so of revues—which means they have a lot of material to choose from.

References are made to both the current and previous mayors (the former gets some quick sketches while the latter gets an entire song), potholes on Lake Shore Drive, Wrigleyville, da Bears and da Bean, among other Chicago notables. Still, the focus is always more on comedy than Chicago and even non-Chicagoans should have no trouble following along with the cracks and one-liners. They might even learn a thing or two about Chicago that the tour guide may, in fact, have neglected to mention; the out-of-towners I went with asked me afterward, “So, Lincoln Park is a snooty neighborhood?” Point made, Second City.

Director Ryan Bernier and the six-member ensemble keep the bits moving fast and funny while maintaining a connection with each other and the material, though transitions are not quite as clean as a typical revue, given that these sketches weren’t originally written to flow together. Still, a final scene at Jimmy’s Woodlawn Tap manages to tie a number of characters and stories together, including an improvised bit that happens early on in the first act. And this cast knows their way around improv, even adding an additional thirty minutes or so of playing time to the end of the ninety-minute performance to really show off their chops. And it’s in those thirty minutes, freed up to create their own material, that the cast, solidly funny up to this point, really shines. (Zach Freeman)