by Brian Hieggelke
September 28, 2013Filed under: 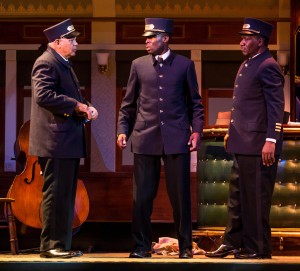 Director Chuck Smith has taken Cheryl L West’s play about three generations of African-American porters working on a luxury Pullman train bound from Chicago to New Orleans on June 22, 1937—the night that Joe Louis knocked out James Braddock at Comiskey Park and became heavyweight champion of the world and hero to Black America—and crafted an engaging entertainment with a little bit of history, a fair bit of bite, a dose of predictability and a ton of heart and soul.

Grandfather Monroe Sykes (the delightful Larry Marshall) has helped grandson Cephas (the earnest Tosin Morohunfola)—AWOL from his classes at the University of Chicago, where he was the family hope to become a doctor—get a summer porter gig on the Panama Limited Pullman Train, not knowing that his son and the boy’s father, Sylvester Sykes (the loving and lovable firebrand Cleavant Derricks), a labor organizer, would also work that run. West’s script draws sharply contrasted characters here—the go-along-to-get-along grandfather not far enough removed from slavery to want to rustle feathers, the son who’s no longer willing to suffer the abuse of a system of institutional and economic racism, and the grandson who’s enjoying the fruits of his forebears labors, but is too young to know whether he’s prepared to buy into their plan for him. Their story together is a moving and authentic intergenerational tale that will connect with audiences of any time and any color. When they sing together in harmony, their moving music says everything about the unity of family even in the face of personal differences.

Riccardo Hernandez’s set is a marvel of scenic design, a train that actually seems to be in motion, with sliding doors inside that allow for rapid compartmentalization of scenes and action, backed by the strong video ambiance of Mike Tutaj. 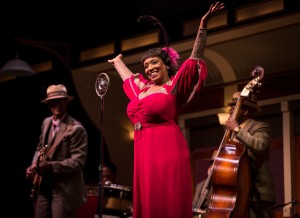 Though it’s not a musical, the blues are a major force in this show—even the disliked white conductor played by the always-stellar Francis Guinan gets his chance to sing them. E. Faye Butler, through her character Sister Juba (a Bessie Smith/Ma Rainey type), a onetime-Pullman-maid-cum-singing-star, commands the stage with her larger-than-life voice every time she takes the microphone. Her presence is so delightful it’s easy to overlook the predictable aspects of her characterization. Less so is the distracting presence of Lutie (portrayed as well as could be by the scruffy Claire Kander), a hardscrabble stowaway with a heart of gold and a gift for the harmonica who drives the narrative off the tracks whenever her character is onstage.

That’s because the portrayal of the dignified but overworked and underpaid porters, and the family struggle at the play’s core, wrapped as it is in such an important and untold part of the story of the Great Migration, is all the story we need to understand this world that the blues was underscoring. (Brian Hieggelke)