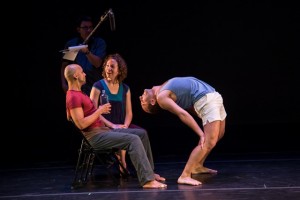 Julia Rhoads and her thoughtful dance theater company Lucky Plush have been on the road and in residency for the last two years, revising and rebuilding two evening-length pieces, “Cinderbox 2.0” and “The Better Half.” Both works—one inspired by reality TV, the other by the complexities of identity and role expectations in marriage, as framed by the 1944 film “Gaslight”—will enjoy a two-week run at the new Links Hall, all leading up to the premiere of a brand-new piece in May. Rhoads spoke with me about the evolution of these works and the importance of revision.

How did the reboot of “Cinderbox 18” come about?
“Cinderbox 18” was a big change in my process. We had finished the structure of the work pretty quickly and had three months to live inside it before showing it at the MCA. We really opened it up in terms of what was the environment, what were the relationships between the people. The work was loosely based on my preoccupation with bad reality TV at the time. I was having babies and nursing and I was tired at night; the only thing I could muster was watching this strange reality programming. When we made “Cinderbox,” I didn’t want to mimic that world, but explore the structures and the mechanisms that made it successful. For me it was the notion that a lot of reality TV is scripted and the tension of what is improvised versus what is planned. There was also the idea that people are drawn to failure. We were playing with those concepts in our process: how to make the performers vulnerable and how to provoke the tension between when things feel choreographed and when the ensemble is in real-time experiences with each other.

It was that work where I became excited by presence. I became interested in directing in a way that provoked dancers into having experiences that felt live and not played. It’s a piece that was dear to my heart and I’ve always wanted to go back to it. In building “Cinderbox 2.0” I wondered what was still relevant about the original piece and what I was looking at with nostalgia. There’s a similar arc to “Cinderbox 18” but there’s new material relevant to the new ensemble members. Almost none of the movement is the same. I think we’ve found a darker quality this time; I think I’ve drawn out the individuality of the company members more. I’m excited to share it. 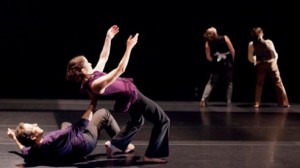 How has “The Better Half” evolved since it was shown in 2011?
The biggest change is Francisco Aviña playing Nancy. The original ensemble member was Kim Goldman who was fantastic in the role, but she couldn’t tour. When we thought about recasting it I realized there was no reason why Nancy should be female. This work is about how so many things in our lives feel scripted and how we reinvent ourselves. Having Nancy be male adds layers about our expectations around gender. The sweet spot of “The Better Half” is finding the strength of the person playing the role; it’s about bringing forth the performers themselves. The other big shift is that during our design residency we brought in filmic elements. Video now locates the piece and anchors the storytelling.

It’s important to us to return to a work. Lucky Plush’s work is so much about real-time interactivity with performers responding to each other and how that functions with an audience that there’s a lot we learn in the premiere run. Dance is usually about working on something for months or a year, it runs for a week, then it’s done. The theater world is great because they have preview runs with audiences and can see how things are landing or not landing. There’s a pressure in dance to not go back and revisit things; you’re always on to the next thing. I think it’s too bad; dancemakers want to dig deeper and figure out what to change. This is another reason why we’re thrilled to bring “The Better Half” back.

Why did you decide to put up both these pieces at the same time?
It’s more work than I thought it would be. “Cinderbox 2.0” is the “premiere” piece, but I also wanted to bring “The Better Half” back to Chicago because it has changed so much during the tour. I am excited about the double feature; I feel these works really play well together. You can see the Lucky Plush through lines in both: humor, live-ness and being present.