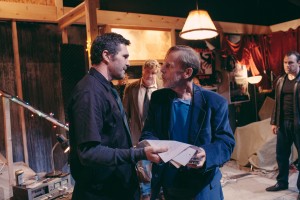 According to country singer Charlie Daniels, when the Devil went down to Georgia he was looking for a soul to steal. In Marco Ramirez’ supernatural-themed rock-comedy, when the Man in White (a slickly conniving and mysterious Gabriel Franken) heads to Rahway, New Jersey to see the rock band Broadsword play, he’s got similar intentions. With grandiose promises of fame and fortune, the Man in White lures susceptible frontman Tony (John Gawlik) away from his friends, family, hometown and the band that almost was.

A decade and a half later, in a basement set so realistic you can smell the unfinished plywood and sense the dust in the corners (scenic designer Stephen H. Carmody is to be highly commended) the former members of Broadsword, along with longtime groupie Becca (played with subtle depth by Cyd Blakewell) gather to mourn the passing (or at least the long-term missing) of a former member of the band: Tony’s younger brother Richie.

Former bassist Victor (James D. Farruggio) and former drummer Nicky (John Kelly Connolly) are all washed up, reminiscing about their days of glory and regretting their own slow declines after Tony split for supposedly greener pastures. Farruggio and Connolly bring both comic relief and emotional weight to the proceedings, delivering a good deal of exposition in a captivating, two-bros-chatting kind of way.

Ramirez (who has now written for “Sons of Anarchy” and “Orange is the New Black”) has a way with dialogue, giving his characters language that is both recognizably colloquial and slightly heightened: “Just cause you stopped callin’ don’t mean this stopped bein’ home!” says one character to another in a particularly intense moment. The cast in this Chicago premiere at The Gift Theatre knows how to embrace this quirky script without playing the comedy too broad or the drama too melodramatic. 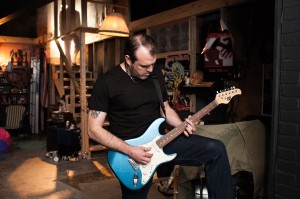 And just when you think you’ve got a handle on what’s happening in this basement, slightly spooky musicologist Dr. Robert Thorne (a cagey Chuck Spencer) shows up and starts to pull the story away from “This is Spinal Tap” and into “The Exorcist.” As it turns out, before his strange disappearance, Richie was working on uncovering the “music within music” and he might have discovered a new (or, rather, incredibly ancient and forgotten) type of music that has upset some seriously bogus bogeymen.

As Becca and the former bandmates work with the good doctor to decide how to proceed, comedy, mystery and mysticism go hand in hand in hand. Carmody’s set, along with Claire Sangster’s tricked-out lighting design and Miles Polaski’s truly haunting sound design ramp up the proceedings. The Gift is not a particularly spacious theater, so audience members are literally a few feet away from the action at all times.

Director Keira Fromm could tighten a few beats and rearrange some tableaus (occasional upstaging is unavoidable but distracting in such an intimate space) but for the most part she’s got her ensemble hitting all the right notes—from quietly comforting friendship to explosive rage and each of the stages in between. At just under ninety minutes (with a rather unnecessary intermission), “Broadsword” is a fast-moving, heavy metal comedy that draws you in fast and keeps you invested till the end. And in its own peculiar way it reminds us to consider the importance of our own souls; just because the Devil offers you a fiddle of gold or a Man in White offers you a record deal doesn’t mean you should take him up on the offer. (Zach Freeman)