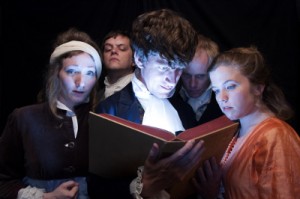 ‘Tis the season for gothic tales and Grey Ghost Theatre obliges with Evan Chung’s original adaptation  of “The Book of Spectres.”  These ancient tales were originally anthologized in the early nineteenth century in “Das Gespensterbuch” (“The Book of Spectres”) by German authors Johann August Apel and Friedrich August Schulze.  Legend has it that the stories were revived and revised on a dark and stormy night by Romantic literary notables Lord Byron, his physician Dr. John Polidori, Percy Bysshe Shelley, Mary Wollstonecraft and her half sister Claire Clairmont, as they read them out loud to each other in the Villa Diodati.

The legendary fallout from this infamous encounter includes Byron’s jilting of the pregnant Claire Clairmont, the suicide of Shelley’s wife and daughter, the eventual marriage of Shelley to Wollstonecraft and the subsequent publication of Mary Shelley’s feminist gothic screed “Frankenstein.”

Grey Ghost frames the exposition of these adapted tales with just this conceit, yet somehow we are never led to understand the amorous underbelly of the Victorian double date. Nevertheless, the production transports us on a charming trip down memory lane as we revisit the European collective unconscious through the assembled European folk tales, a rare and valuable experience in itself. However, the production is almost too ambitious to harness the necessary dramatic suspense, and one is amused more often than actually terrified by the ensuing theatrical proceedings. Still, clever use of Lauren Nigri’s props, John Weygandt’s lighting and Michael Huey’s sound design all contribute to a classic and at times even campy gothic atmosphere, while standout performances by Andrew Bailes as Lord Byron, Aaron Lawson as Dr. Polidori and Tim Parker as Shelley keep the show moving at an engaging clip.

The Book of Spectres is an interesting departure from traditional Chicago storefront realism and will definitely get you in the mood for the upcoming All Hallows’ Eve. (Kaelyn Storme)