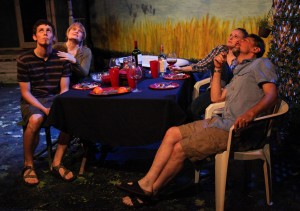 The insanely prolific, Pulitzer Prize-nominated Theresa Rebeck, she of “Law and Order: Criminal Intent” fame, tries her hand at Greek tragedy. And while Rebeck captures the scorched-earth policy that the genre requires, the language is a little hit-or-miss and some of the characters are missing the blind desire that keeps them from seeing just how much trouble they are in.

Richard (Ray Kasper) returns to his childhood homestead with a much younger girlfriend (Mary-Kate Arnold) to visit his estranged wife Helen (Amy Kasper) and begin a relationship with children Nate (Tim Larson) and Erica (Sara Pavlak). Understandably, the children don’t want to see the man their mother has spent a lifetime trashing. But everyone agrees to play nice because, well, daddy’s home, and he can take their house away if he wants.

Rebeck pays tribute to standard Greek tragedy tropes: daddy issues, mommy nightmares and revenge, revenge, revenge. Her flights of language don’t always work next to the modern-day dialogue, but they underscore Richard’s pretentiousness. The temper tantrums and lightning fast changes of mood are oversold but this is a Greek tragedy. They play it big in Greece.

Amy Kasper seems a little subdued for a woman who’s been boiling in bitterness for seventeen years, but she pours it on when she needs to at the end. Larson’s goofiness belies the decisions he will ultimately make; he successfully negotiates a hard-core change. Arnold captures the neurotic sex-kitten tone her character requires but because Rebeck doesn’t give Richard much to do, one wonders why she’s there in the first place. Pavlak manages to instill the appropriate yearning into her bitter daughter; she struggles with her desire for a relationship with her father. Ray Kasper does what he can with the underwritten Richard; the necessary longing that drags him back to his family is there, but the guilt that drove him away is missing. The audience gasped during the big, tragic reveal when I saw it; Rebeck’s path may be flawed but she manages to get there. (Lisa Buscani)