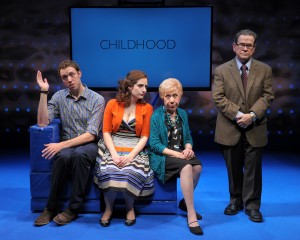 Talk about high-concept. If you can’t gather what this show is about based on the title… what kind of a dumb schmuck are you? Based on the popular website OldJewsTellingJokes.com (guess what’s on the website), the original production of “Old Jews Telling Jokes” just closed in the middle of last month after running for almost a year and a half Off-Broadway before opening in Chicago at the Royal George Theatre with plans to run through mid-February of next year. And this goyim loves it.

Though the concept and presentation are blatantly Jewish (even the program looks like a deli menu while the logo is a monstrous pastrami sandwich with a gherkin perched on top of it) the main conceit here is just to throw out as many jokes as possible (along with a few song-and-dance numbers and some brief monologues) and keep the laughs coming. Stripped down, this show really isn’t much more than a long series of jokes: puns, one-liners, anecdotes and stories.

But beneath the lewd and crude humor (and there is a truly satisfying amount of that throughout the show) creators Peter Gethers and Daniel Okrent work to bring forward a genuine sweetness amidst the wisecracks and celebrate the healing effects of jokes and laughter. One character talks about easing the pain of his father’s cancer diagnosis by telling jokes. Another talks about how it brought her and her boyfriend’s Gentile family members together. We’re told that there are “no inappropriate moments for humor.”

And lest things get too heavy, even these sobering moments are laced with comedy and director Marc Bruni (who served as associate director on Chicago’s “The Book of Mormon”) keeps his multifaceted cast moving around the strikingly bright blue stage and constantly engaged with each other and David Gallo’s vivid video design displayed on a giant movable flat screen. 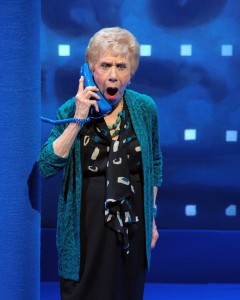 Throughout the show this cast is a thrill to watch, especially when one member is telling a joke while the others watch from the sidelines and laugh along with the audience. Second City and “SNL” alum Tim Kazurinsky executes mumbling uncertainty to perfection. Delightfully animated Gene Weygandt uses his talents as a voiceover actor to deliver a bevy of well-defined characters. And the adorable and spunky Renee Matthews prances from scene to scene delivering profanity-laced punchlines that belie her wide-eyed innocence. The other two cast members (the charming Tina Fey-like Dara Cameron and the affable Alex Goodrich) may not be old by a long shot but they’re still Jewish (and they’ve got comedic chops to spare).

Jokes are broken into categories (let’s call them sets) ranging from “Birth” to “Marriage” to “Old Age,” with “Sex Before Marriage,” “Sex After Marriage” and “Sex Way After Marriage” thrown in to allow for more sex jokes than you can shake a loaf of rye bread at. Not all the jokes have Jewish references; a good deal of them are just good old-fashioned jokes with solid punchlines. But even these jokes are typically given a dash of Jewishness—maybe the protagonist is named “Irving” or someone is referred to as a “putz,” whatever pushes that man-stranded-on-a-desert-island joke over the edge. Jokes are also given a dash of Chicagoness, with references to Highland Park, the Edens and O’Hare sprinkled in for good measure. And judging by the audience reaction on opening night these Jews can expect a warm welcome in Chicago from Jews and Gentiles alike. (Zach Freeman)