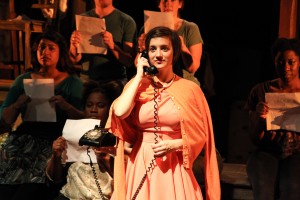 “How do we tell that story and, like, tell the truth?” one hip young ensemble member asks another in the unwieldy (and unwieldily titled) “Unwilling and Hostile Instruments: 100 Years of Extraordinary Chicago Women.” Gathered in “a rehearsal room at The Hull House Theatre”—actually American Theater Company, where Kerith Parashak’s mazelike set is appropriately packed with Joshua Hurley’s seemingly random and decaying collection of props—they’re rehearsing the show we’re about to see.

It’s a show about history and Chicago and women. But it’s not going to be THAT kind of show, these actors assure each other as they playfully prepare. Because they wouldn’t want to put on THAT kind of show. They just want to cut the bullshit, tell the truth and not be all “…Historical. Like ‘capital H’ Historical.”

Well, it’s an admirable attempt. The thing is, a tongue-in-cheek, self-aware, meta after-school special is still an after-school special. And no matter how hard this energetic cast works to push back against presenting a rather dry pedagogical series of historical pieces linked together via entertaining (though mostly inane) backstage banter, that’s what this world-premiere production (featuring plays by nine Chicago playwrights) currently is.

Seven Chicago women (Jane Addams, Ida B. Wells, Cora Strayer, Maurine Watkins, Ann Landers, Mavis Staples and Myra Bradwell) are highlighted and their stories are, indeed, extraordinary—except perhaps Ann Landers (aka Eppie Lederer), who is oddly presented here as a well-to-do housewife who seemingly decides to take on the “Ask Ann Landers” column just to compete with her twin sister Pauline (who went on to write the “Dear Abby” column). But the mixing of so many different playwrights with different styles to tell these stories causes the show to feel discordant and incohesive; Nick Ward’s piece on Myra Bradwell is an improbable comedic ghost story while Carla Stillwell’s short on Ida B. Wells is tense and moving. 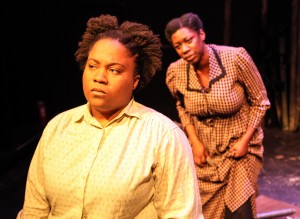 And with the show clocking in at around two hours and fifteen minutes (with one intermission) the sometimes clever “rehearsal” dialogue (meant to lighten the mood and put a fresh spin on a number of issues) quickly starts to wear thin, as we witness the remarkably amicable debates and disagreements between cast members that bookend each historical figure’s story. Why can’t we call Jane Addams a lesbian? Why are all the male characters such douchebags? And what’s the value of theater or any kind of art in the first place? “Nobody that sees this play is gonna act any different!” one character adamantly points out to her cohorts.

And though each viewpoint seems to have a counterpoint, somehow we always end up back in the same place: sighing about how complicated things are and deciding that we need to push on anyway. For the most part, these digressions do raise interesting questions—but raising interesting questions and actually providing fodder for interesting discussions are two different things. Many of these conversations get right to the brink of being compelling before pulling back.

If we’re going to listen to an activist argue with a protest-shy associate, shouldn’t we get more than the equivalent of “Protests make me uncomfortable!” / “Protests are the only way to make a difference!”? Either director Elly Green needs to up the stakes for her ensemble so that the current disagreements really matter to the participants or the script needs to be altered to allow for deeper discussions. Right now it mostly feels like friends passing time—and that’s not exactly engrossing.

“Unwilling and Hostile Instruments” is an ambitious and admirable show, produced this year to celebrate the 100th anniversary of women’s suffrage in Illinois, but in its current incarnation it’s too long and disjointed to achieve the effect it’s attempting. As the script repeatedly tells us, these women deserve better. (Zach Freeman)