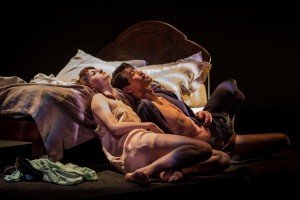 Everything about this world-premiere adaptation of French author Marguerite Duras’ novel of the same name is surreal. Scenes fade in and out with dreamlike transitions and overlap. Daniel Ostling’s deceptively simple, blankly carpeted set pops tables and chairs up through the floor, silently rotates entire scenes around and features a large door piece that seems to magically slide itself across the stage when needed. The frequently dim but often colorful lighting design (also by Ostling) creates a smoky effect over the stage, as if you can just barely make out what’s happening. In several scenes, Betti Xiang (backlit in a corner of the stage) plays haunting melodies on an erhu (sometimes called the “Chinese violin”).

But the story itself—ostensibly autobiographical, though we’re told from the beginning by M (an understated and rather mysterious Deanna Dunagan) that our narrator may not be completely reliable—is the most surreal of all. The story of a fifteen-year-old girl (a strident Rae Gray, referred to only as “The Child”) and her affair with a twenty-seven-year-old Chinese playboy (the effortlessly urbane Tim Chiou, referred to only as “The Lover”) in early 1930s Indochina, this adaptation by Heidi Stillman (who also directs) does little to sugarcoat the nature of the couple’s relationship. She at first claims to be seventeen, then sixteen-and-a-half, but The Lover believes neither.

This tale of sexual intrigue involving a troubled minor with a dysfunctional home life and an older wealthy man would be an odd sell anywhere, but at Lookingglass (where only a few years ago Stillman herself co-directed the excellent and heartbreaking “Trust” with David Schwimmer), it’s truly surreal. “Trust” tells the story of the online seduction and subsequent rape of a teenage girl by an older man. Even after the rape she wants to believe that the man loves her and that she is special to him, until her family and federal agents help her to face and overcome the difficult truth.

In “The North China Lover,” our young protagonist feels the same way about her man, despite the fact that “The Lover” has many mistresses, is engaged to be married to another woman, refuses to marry her (he would lose his inheritance if he did) and even threatens to kill her at one point. The difference is that in “The North China Lover,” even our much older narrator (clearly The Child grown up) still believes that she was involved in a tragic but epically true love affair and not repeated statutory rape (or even a strange form of prostitution). Imagine an all-grown-up Lolita wistfully pining for her time with Humbert Humbert. 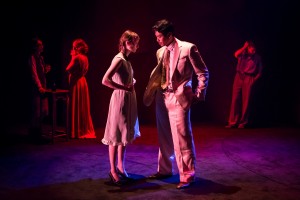 Discussions of race, socio-economic status and societal norms (The Child’s mother, an affected but strangely amicable Amy J. Carle is a “ruined” woman, “The Lover” is threatened with being disowned if he does not marry the wealthy Chinese woman his father wants him to marry) are thrown in but don’t justify the fetishization of this unbalanced relationship. Are we meant to believe, as a judge in Montana recently declared of a statutory rape victim who later committed suicide, justifying the older man’s actions, that The Child is “older than her chronological age” and “as much in control of the situation” as The Lover?

The actors are well-cast but everyone seems to be in their own play. Gray talks like a character in a 1930s noir while Allison Torem (oddly enough, the lead in “Trust”) plays The Child’s best friend (and sometimes lover) Helene with a modern childlike awkwardness and guilelessness. The Child’s other sometimes lover (her younger brother Paulo), played delicately and by JJ Phillips, seems to flit across the stage like a mime, while her older brother Pierre (Walter Owen Briggs) is a quick-moving force to be reckoned with—barking laughter or threatening violence. And Chiou’s Lover glides in and out of most scenes with a knowing smirk.

Again, it’s all very surreal. The experiences depicted here may have helped inspire Duras’ career as an acclaimed novelist but it seems disingenuous to call this narrated (and often melodramatic) dreamscape of a childhood memory a love story rather than an abuse story. It will certainly stick with you but perhaps not in the way it’s intended. (Zach Freeman)

Thank You. I saw this play and was very disturbed by the tone of it, especially the ending, which attempts to gloss over a story of child sexual exploitation as a beautiful love affair. The other reviews I have read have bought into that idea completely.