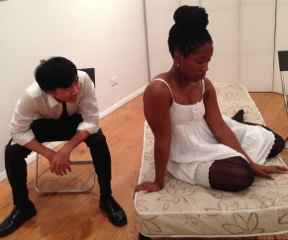 Seen from below, from the viewpoint of the victimized and marginalized, the city takes on a permanent twilight glow, as bright promise meets dark, hard realities. This is the setting of “Shadow Town,” a new play written and directed by Her Story Theater’s Mary Bonnett and premiering in October at the Den Theater on Milwaukee Avenue.

The ninety-minute show is about sex trafficking in Chicago. Even spiced with song, dance and dark humor, and topped with an array of celebrity “guest talents” (ranging from Bill Kurtis, Rick Kogan and Joel Daly to Jan Schakowsky and Anita Alvarez), it does not seem the most entertaining of subjects. However, it is very much in tune with Her Story’s mission, which is “to shine a bright light on women and children in dark places, in need of social justice and community support.” “Shadow Town” is the second part of Bonnett’s planned trilogy on this theme. The first installment, “Gloss Over,” dealt with homelessness; the final, “Cide Show,” will examine violence against women.

At a time when much local performance activity is dedicated to the showbiz trinity of commerce, career and media hype, Bonnett champions a brand of theater that takes the audience exactly where it does not wish to go and pushes them toward awareness and action. No place is more disturbing than the one depicted by “Shadow Town,” which tracks the path of four young women into “the game,” as it is called by Prime Cut, a Chicago pimp and trafficker.

Three of the girls are local—one from Naperville, who takes up with online “friends,” the others from minority communities in Humboldt Park and the West Side—while the fourth is brought here from China. All discover themselves in a world defined by exploitation on one hand and indifference on the other. Suddenly, they have no control at all over the most intimate aspect of existence, and their own youth and defenselessness are transformed into a come-on for interchangeable johns. 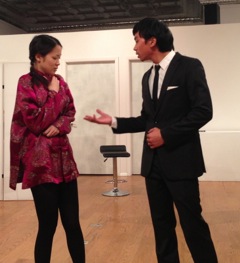 One of the goals of the play, according to Bonnett, is to make viewers aware of the damage done by what is commonly referred to as a “victimless crime.” Studies suggest that the average age of induction into the life is only twelve to fourteen. In researching the piece, Bonnett spoke to therapists who work with the girls after their careers on the street have ended. “They say it’s like treating POWs,” notes Bonnett. “Many have been molested from a very young age, and trust is a huge issue. We dismiss being prostituted as not life-threatening—but then you see the impact on children.”

Each of the stories depicted in the play is multiplied by thousands every day here in Chicago. Human trafficking—defined as the recruitment and transportation of persons by force, fraud or coercion for purposes of exploitation—is the world’s second- or third-largest criminal enterprise (after narcotics and possibly arms smuggling) and the fastest growing, according to the federal government.

This modern-day slavery occurs on an industrial scale, enmeshing an estimated twelve million adults and children worldwide. Chicago, with its international airport, myriad hotels and conventioneers, and well-developed infrastructure of organized crime and corruption, is a hub of trafficking, both foreign and domestic. According to Bonnett, the business has exploded over the last few years, as the Internet and smart phones take much of the risk and inconvenience out of the process, creating an antiseptic global eBay for the flesh trade.

Bonnett spoke to everyone from girls trying to extricate themselves to vice squad cops, social workers and even johns. (That was not easy, she acknowledges: “You’ve got to know somebody who knows somebody.”) Many of the interviews were arranged through the Dreamcatcher Foundation and the Salvation Army PROMISE program, which work with trafficked girls and women. The show’s proceeds will benefit the two organizations.

But the larger purpose is not so much fundraising as it is illuminating a double-standard system that readily and repeatedly jails the young women forced into prostitution, while continuing to treat the pimps and purchasers with a boys-will-be-boys leniency. “Some cops use the product, and tend to turn away their eyes—it’s the same with judges and politicians. The cops do pay attention to younger girls, but that only drives the trade deeper underground. It’s hard to deny the sense of male entitlement which enables the profound cruelty of trafficking.”

Bonnett, whose background covers both drama and teaching, has always gravitated toward a theater of social purpose. It was while working with young students at the Franklin Fine Arts Center magnet school in Old Town that she discovered the power of performance as a tool for both learning and healing. She describes theater as an “equalizer,” potentially giving voice to the unheard and bringing the powerful to account. 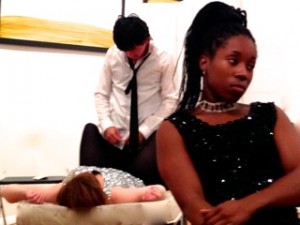 In “Shadow Town,” Bonnett has broached a topic that is not merely suppressed in the media and public consciousness, but repressed and distorted into something less disturbing and more acceptable. Thus a professedly progressive web site recently attacked anti-prostitution laws as a form of class bias, describing sex work as “a peaceful and voluntary way to make a living”—as though trapped and manipulated girls and boys servicing ten-to-twenty men a day, every day, is equivalent to busking or panhandling. And the Sun-Times sports section has an ongoing ad offering “pretty little kisses” from “Polish, Asian and local girls”—just kindly do not ask how they got into this particular line of work.

The brothel has always been central to the life of the city, from Babylon onward. It is the borderland where high and low mingle and social boundaries relax and re-form. Gazing at the midnight streets of London two centuries ago, the poet William Blake saw not the glories of empire, but rather the “youthful harlot’s curse,” her misery cast back on society in the form of disease. Chicago’s own history—featuring the Gilded Age opulence of the Everleigh Club, the sprawling Levee vice district, Bathhouse John’s and Hinky Dink Kenna’s demimonde First Ward Ball, and Nelson Algren’s searing portraits of 1940s-era panders and streetwalkers—is shaped by the experience of sexual commodification, itself driven by anonymity, inequality, basic human drives and a boundless capacity for denial and hypocrisy.

What “Shadow Town” intends to show, according to both Bonnett and cast members quoted in a publicity video, is that the specter of underage prostitution and sexual slavery cannot be relegated to some remote and primitive past. It remains and grows and needs to be confronted. These horrors are indeed our city’s shadow, the unacknowledged aspect of civic life that reveals inner contradictions. The play’s premise reminds us that if just one child is treated as a disposable object, then all youngsters are vulnerable. If it succeeds, then the characters portrayed onstage will seem not like somebody else’s children, but our own.

“Shadow Town” opens on October 10 and runs through November 17 at The Den Theater, 1333 North Milwaukee. HerStoryTheater.org.