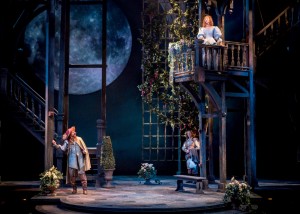 Sometimes Chicago Shakespeare produces bold reinventions of classics. Other times it brings in world-theater innovators as one of the most globally minded cultural entities in Chicago. And then sometimes it produces high-quality but highly conventional productions of iconic works. Director Penny Metropulos’ new production of “Cyrano de Bergerac” is the latter, a perfectly straightforward interpretation of Edmond Rostand’s 1897 story about love and deception that engages the wit but fails to move the heart.

The story is familiar to most: Cyrano, a man of extreme eloquence and skill with the sword, a leader of men blessed with a nose almost as long as the death scene that ends the play, finds a vessel for conveying his love for Roxane through the handsome but tongue-tied Christian; complications ensue. Harry Groener as the nasally endowed Cyrano, who wields poetry in seventeenth-century Paris the way that battle rap is practiced today, has a sturdy presence, better in scenes requiring bravado than intimacy. Nick Dillenburg plays the witless pretty boy Christian as if he were born for the role, and Julie Jesneck delivers a perfectly good performance as Roxane, though I never really felt the magic of her sway over all these men. Kevin Depinet’s sets are cleverly conventional; so too Susan E. Mickey’s period costumes and Melissa Veal’s all-important wig and makeup design. If, like me, you’re more familiar with the story than the text it’s based on, it’s a solid, PBS-like production (and way too long). Just don’t go looking for sparks of romance or imagination. (Brian Hieggelke)