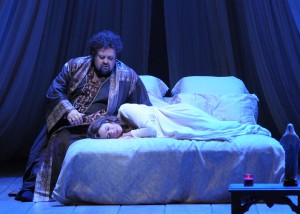 In a year that celebrates the 200th anniversaries of Wagner and Verdi, how fitting that Lyric Opera should open its season with a work that manages to pay tribute to both.

There was a sixteen-year silence from Verdi between “Aida, ” after which he had retired, and “Otello,” where a septuagenarian Verdi once again took up Shakespeare at the urging of collaborator Arrigo Boito for the first time since his youthful setting of “Macbeth,” spectacularly performed recently in concert form by Riccardo Muti at the Chicago Symphony Orchestra.

In the interim, the already significant influence of Wagner had spread like wildfire throughout the opera world, even to Verdi’s Italy: the fusion of music and drama had become more pronounced, orchestras had expanded and were a greater part of the musical fabric and texture, and set-aside pieces, arias and ensembles had given way to a more unified, contemporary art form that was through-composed without stops and starts from start to finish.

Would the elderly Verdi that would musically re-emerge in “Otello” make a nostalgic nod to the nationalism that the younger Verdi had personified and whose operas had become the soundtrack for Italian unification, or would Verdi somehow make use of more recent but non-Italian developments in his art form?

Without sacrificing his distinctively Italian musical identity or style, Verdi ended up finding a way to take the best of what the Wagnerian revolution had wrought and use it to his own advantage to create a work of striking originality. To many, “Otello” remains the greatest work of Verdi’s output and indeed, of the entire Italian operatic tradition. It also manages to be the single operatic setting of Shakespeare that is largely considered equal to, if not better than, the original play.

Although “Otello” has the reputation of being a tenor-killer—indeed, the role proved too much for Luciano Pavarotti, who attempted it only once in concerts with the Chicago Symphony at Solti’s 1991 retirement—it was Iago who was having trouble Saturday night.

Suffering from allergies, German bass-baritone Falk Struckmann had gone through the paces of a final dress rehearsal without singing a note to preserve himself. On opening night, Struckmann sang Act I respectably while unfolding a cunning Iago with swagger who was leopard-like, sleek and graceful as Verdi had indicated. 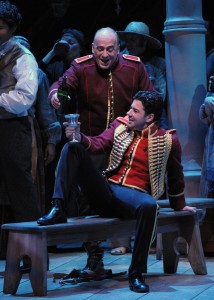 Before we had a chance to experience what Struckmann would have done with Act II, which is by and large Iago’s act, Lyric Opera general director Anthony Freud came in front of the curtain and announced that Struckmann was unable to continue and that his understudy Todd Thomas would go on for him for the rest of the performance. Cancellations are nothing new in the opera world, but the idea that a singer would stop mid-performance and hand it off to another performer is a rarity, particularly when there was no discernible distress.

Be that as it may, Act II opened with an Iago who was stockier, shorter, older and had hair (Struckmann had shaved his head for the role) and had a voice with lots of air and sputters. As he confidently strolled around the stage, it was obvious that Thomas, a regional opera star who had done Iago many times, was in his element even if his performance was definitely of another era that viewed Iago as a classic opera villain who needed to telegraph every move he was making to destroy Otello.

Thomas saved the evening, to be sure, but the sudden shift was disconcerting not only for the audience, but for the cast as well, which kept on its toes wondering what Thomas would do next with such a pivotal role that he was literally walking through with this cast and conductor for the first time.

It did not help South African tenor Johan Botha, a man with a radiant and clarion voice best known for his signature Wagner roles who was starring in the title role, to not know what his Iago would do next. A large and often static man, Botha having an Iago who was unpredictable seemed to put the dramatic side of his performance a bit off kilter. This is a role that Botha sang last year at the Met, but not before having had vocal trouble serious enough to withdraw from some performances.

Botha’s voice was unquestionably in top form on opening night. As if to demonstrate that he is the real deal when it comes to this torturous role—particularly in a huge house such as the Civic Opera House—Botha let his voice gloriously ring throughout the house, sometimes more than what was needed in moments that called for more dynamic nuance.

The standout performance both dramatically and vocally was Puerto Rican soprano Ana María Martínez, making her role debut as Desdemona. Her qualitative past work here would not have suggested that this would be the ideal role for Martínez, but she really put her heart into her portrayal. Martínez really made us believe that she was in love with Otello, and even showed us touches of spirit against her husband that were quite effective. Her Act IV “Willow Song” and “Ave Maria” were remarkably tender, and really were the highlights of the evening.

Michael Black made his overdue official debut as Lyric Opera Chorus Master, and what a memorable debut it was. The chorus is a vital component in any “Otello,” setting the entire opera in motion with a ferocious storm scene that was hair-raising. French conductor Bertrand de Billy was also making his Lyric Opera debut, with more mixed results. He certainly kept control and the action was always admirably kept moving, whether the cast or chorus was ready or not, but the dynamic shades that Verdi calls for were often glossed over. Sir Peter Hall’s production has held up well, Ashley Dean taking up the director mantle even if the chorus is inexplicably kept behind a screen in its spring scene. (Dennis Polkow)