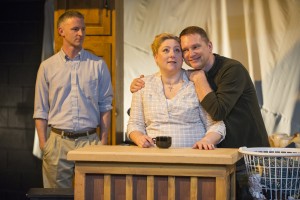 First off, this play (in its world premiere production here) is extremely timely: a story about “coming out” that asks if an entire life is a lie if one can’t embrace his or her sexuality or overcome the stereotypes. I wanted to like this play. The theme is important. The idea is relevant. The cast is seasoned. And Pride Films and Plays, along with writer Martin Casella and director David Zak, have been doing good work for a long while. That being said, the four-piece ensemble is fairly wooden, the show lacks tension and offers minimal conflict.

The subjects of death, leukemia, repressed sexuality, a blind father, overdose, and even Mormons should supply adequate fuel but rarely is any heat created between Jinx (Patrick Gannon) and Griff (Patrick Rybarczyk), lifelong friends who go to England for a vacation to reconnect and answer questions about their past that remain a mystery, particularly to Griff. There is a present, awkwardly forced, uncomfortable touching between the main characters—manly backslapping, brief shoulder rubs and the like. While the characters are supposed to be awkward during physical contact, it feels forced and overstated, blurring the lines when passion or grief are supposed to be at the forefront.

From the beginning, the outcome is broadcast and delivered with an exposition that is retold in a dragged-out and rather bland manner. And while competent, the set design (by Ashley Ann Woods) offers little to look at. The only standout in the production is Nick Stockwell as Richard, Jinx’s longtime partner, who delivers a needed injection of passion throughout his limited role. He is easy to watch, entertaining in volume with a smile that brings a creative energy to the stage (which quickly dissipates every time he exits). In addition to Stockwell’s performance, the inner storyline is designed with a nice complexity. With seamless direction, the back-story wends its way throughout, but all in all, the production is fairly disappointing. At its heart, there is honesty and sophistication, but ultimately, the actors can’t hold it together. (Mark Roelof Eleveld)