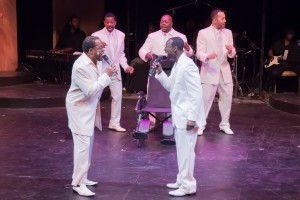 If you don’t already know the storied history of Curtis Mayfield—known to some as “the black Bob Dylan” (or was Dylan the white Curtis Mayfield?)—you will by the end of this thoroughly historical production, currently running at Black Ensemble Theater. Written, produced and co-directed by Jackie Taylor (with Daryl D. Brooks) this biographical show features an impressive amount of Mayfield’s music (dazzlingly performed by an energetic cast and backed by a hard-working, talented onstage band) mixed in with a good deal of stilted, fact-laden dialogue. And therein lies the drawback to this otherwise captivating musical production.

Making excellent use of Mayfield’s music (both his own songs and songs he wrote for other performers) Taylor has written the show as a reflection piece, with an older, paralyzed Mayfield—mesmerizingly portrayed by Reginald E. Torian, Sr., the lead singer for Rock and Roll Hall of Fame inductees The Impressions since 1972 (when he replaced Mayfield)—looking back on his life and discussing his past successes and (ever so briefly) failures. And though Torian’s voice and emphatic acting captures and maintains audience interest (all the more impressive for his being a musician and not an actor) the flashback style effectively kills many of the more dramatic moments in Mayfield’s life.

As a young Mayfield, Cecil Jones has the looks and voice for the character, but when he’s not singing he mostly seems to be spouting oddly prophetic sentiments. Too often we get the impression that he knows exactly what’s going to happen and how each action he takes (or doesn’t take) will affect how he’s viewed historically. For a man like Mayfield, with such a richly complex life (growing up in Cabrini-Green and helping to establish the Chicago music scene) this method of portrayal is both inspiring and diminishing at the same time.

Mention is made of two failed record companies and struggles with The Impressions before (and after) they truly made it big, but these difficulties are mostly glossed over in favor of successes and uplifting aspects of Mayfield’s history. Yes, there’s a lot to celebrate, but not in exchange of telling a full history. 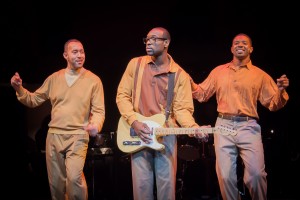 Still, when the full fourteen-person ensemble is onstage dancing, singing and clad in Samantha C. Jones’ truly striking costumes (which is quite often), this show nearly bursts with passion, enthusiasm and all-out investment in all things Mayfield—in fact it’s nearly impossible not to stomp your feet or clap along with the music. It’s these quieter moments between songs that need some reworking, currently feeling rather contrived. These are the moments when we should be learning about Mayfield the man; instead we’re learning about Mayfield the Legend.

To be clear, a man like Mayfield (a genius we’re reminded many times over) surely deserves to be celebrated and counted among our national musical legends (he received the Grammy Lifetime Achievement Award in 1995), but infallible legends aren’t as interesting to watch as men who fought, struggled and overcame (as Mayfield did). Musically, this production is top-notch; it’s the story-telling that leaves something to be desired. Regardless, audience members here to have a good time are sure to come out all-right. (Zach Freeman)