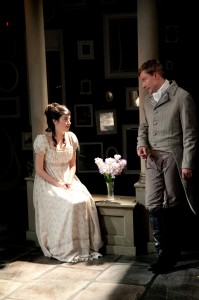 “No one who had ever seen Catherine Morland in her infancy would have supposed her born to be an heroine, ” begins Jane Austen’s mock-gothic novel, “Northanger Abbey.” Catherine is no great beauty, her family of no particular distinction and her accomplishments and education far from special. “But from fifteen to seventeen she was in training for a heroine; she read all such works as heroines must read to supply their memories with those quotations which are so serviceable and so soothing in the vicissitudes of their eventful lives.”

Young Catherine’s gift—and weakness—is a well-heated imagination. This teenager making her social debut in the spa town/marriage market of Bath can engage with the realities of adulthood only through the medium of romance and fantasy.

Tim Luscombe’s adaptation, as capably directed by Joanie Schultz, captures the interplay of fact and fancy at the book’s heart. In a winsome play-within-the-play, the heroes and villains of Ann Radcliffe’s “Mysteries of Udolpho” morph into characters in Catherine’s life, rendering every ballroom nod and glance pregnant with mythic significance. Catherine’s own seventeen-year-old identity shifts moment by moment, as her shimmering Regency frocks are peeled off at every encounter, revealing another cloak and a deeper layer.

Sarah Price plays Catherine as a gawky, dewy-eyed ingénue with a warm smile and an alternately endearing and annoying inability to read other people. Her struggles are those of every seventeen-year-old, anywhere and any time: how to distinguish false friends from true, how to manage the delicious chaos of fast-stirring hormones—and especially how to retain both popularity and self-respect, as the powerful wills around her try to bend her natural complaisance to their own ends. All Catherine has to guide her is a dog-eared copy of “Udolpho,” wherein all men are either brutes or saviors. 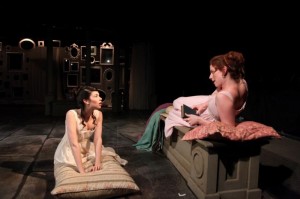 “Northanger Abbey” is not Austen’s masterpiece—it was never published in her lifetime, perhaps due to a relative flatness of character and weakness of ending. But even second-best Austen is better than just about anything else. Adaptor Luscombe succeeds in translating the novelist’s wickedly sharp depictions of male-female dialectic into a nimble script that trots along like a duke’s equipage. Well-cast, costumed and lighted, Northanger Abbey is one smoothly pleasurable evening of theater, not only to Austen admirers and Anglophiles, but to all those who are or ever have been adolescents. Darci Nalepa and Robert Hope, who play the scheming, duplicitous Thorpe siblings, chew on their meaty roles with particular gusto, as does John Lister as General Tilney, the greedy father of Catherine’s beloved Henry (Greg Matthew Anderson), who exists to thwart the happiness of the star-crossed but ultimately triumphant couple.

Beneath the iridescent wit lies a darker meditation on class, gender and power. At one point, visiting Henry in his medieval abbey-turned-estate, Catherine decides that such an eerily picturesque setting simply must be the scene of spine-tinglingly murderous secrets—and English Udolpho, with the autocratic General as arch-villain. Of course it’s all nonsense, but what she does discover is that the General is a maneuverer of surpassing ruthlessness. He unceremoniously evicts Catherine from his house when he finds she is not as rich as he had hoped, and hence is not only an unsuitable connection for his son, but also a non-person, a nuisance to be disposed of.

All ends happily in the (unconvincing) end. But Catherine, at one point shunned and alone, has had her moment of fear and vulnerability, and found it no fun at all. The evil she has found is in the crass indifference of a hypocritical, acquisitive and patriarchal society, where character and sincerity count for less than lands, rents and cash in the bank. The young girl’s sadness and humiliation is not as showy as moldy crypts and skeletons on stormy nights, but it hits deeper and it rings true. (Hugh Iglarsh)