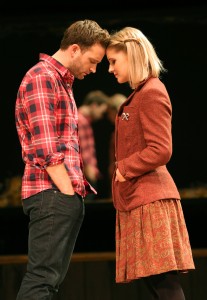 Can a man and woman be attracted to one another, have a life-transforming friendship that betters both of them without consummating their relationship? That is the question that “Once” asks, but it does so with a lot of homespun folksy music, like an after-school special set to a hootenanny.

The idea began as an Irish independent film about a Dublin street musician who meets up with a Czech mate who takes interest in his original songs. Boy meets girl, girl likes songs, boy wants girl but has to settle for her piano playing and her singing. His songs plus her input equals boy and girl each find themselves.

It is a sweet story with a great message, but the problem is that only the homespun songs that were used in the film are preserved here, sung and accompanied by the cast itself onstage who are surrounded by instrumentalists who are also characters in the show.


No one has made any attempt to actually rethink what was a film as a Broadway-style musical, which certainly could have been done, even while keeping the folk-rock genre of the piece. Thus, every song is a sleepy, guitar-strummed ballad and none manage to forward the plot, such as it is, which makes for a rather static evening, not helped by the fact that what should be an intimate show is rather lost in the cavernous space of the Oriental Theatre.

This could be a rather effective community theater show as the songs are simple, easy enough to play and sing. Geesh, there could be “Do-It-Yourself” versions of “Once” (as there are Do-It-Yourself Messiahs) where folks could bring their own guitars, perhaps even their own songs. 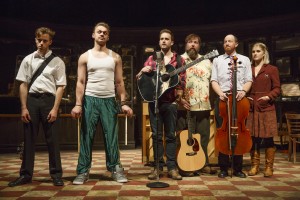 The movie ended up as much improvised as it was scripted, filmed on a shoestring budget on locations without permits with long lenses, et al. The leads were both musicians who learned to act for the film and were chosen for their chemistry together. Such a reality-show level of spontaneity is rather difficult to replicate with even top theater talent, especially when so many accents are involved with varying degrees of credibility (the accents in the film were real). Perhaps setting the show in the States and having performers that are comfortable improvising could approximate the same effect?

With the stage version, it’s hard not to be struck by the fact that the most energized moments of the evening are when the cast is sitting around playing and singing actual folksongs as the audience is coming in before the “show” has even started. Not a good sign. (Dennis Polkow)