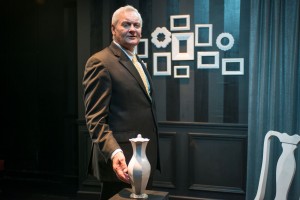 I waited for it, and I wasn’t disappointed. I knew Neil LaBute’s latest could not be just a simple story about a man’s love for his late wife. There had to be a nasty wrench in there somewhere, some product of banal cruelty. And there it was, jammed in there and reconciled quickly in a kind of gentle concession. LaBute is consistently clever and his embrace of the direct-address monologue is an interesting exercise, but his attempt to rationalize his character’s actions rings hollow.

Edward Carr (John Judd) comments on his own performance of his wife’s eulogy. The audience learns of the death of his beloved Mary Jo, a woman fifteen years his senior. The marriage started as the product of a painful affair, but blossomed into a great love. Several years, two children and a business empire later, Carr reveals himself as he mourns his loss.

Structure problems aside, Judd imbues his character with just the right amount of interesting imbalance. He is passion incarnate, going from emotional zero to sixty in two seconds flat. He waves his arms and snaps his fingers yet Judd’s controlled interpretation convinces us that we are simply dealing with a focused go-getter. Judd’s performance makes LaBute’s twist plausible but unfortunately, he isn’t given enough time to sell it.

Jason Gerace’s direction stays on top of the pacing and his blocking keeps the piece visually varied. Eric Broadwater’s set is elegant, abstract and ironic; his use of black and white casts a binary light on a situation that is anything but. Unfortunately, his decision to hijack the tone at the eleventh hour robs LaBute of the opportunity to say something a little different. (Lisa Buscani)