Four interviews, side by side, began with similar sentiments about the state of theater in Chicago; four interviews with theater artists collaborating on the Mammals’ unique All Girl Project in which women play roles generally reserved for men, including Frankenstein, Ahab and Kurtz. Here are the fiery responses of adaptor Bob Fisher and three actresses from “All Girl Frankenstein” when asked, “Why All Girl?”

What do you feel about the role of women in the Chicago theater scene? 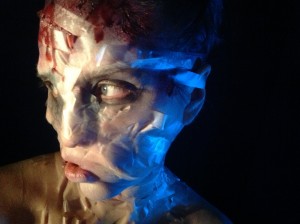 Erin Myers (Victor Frankenstein in “All Girl Frankenstein”): It’s not like women are being intentionally discriminated against—it’s more of an inherited discrimination. Plays are stories; stories are action and history. Most plays are stories about men. So, especially with classic works, women are underrepresented—it’s just a result of how women have been historically thought of.

Erin Orr: Let’s face it: there are always more roles for men and more women performers… It’s always a numbers game… The All Girl Project evens out the playing field. Women performers are not underrepresented … There are so many of us, but we are UNDER-UTILIZED! Let’s face it: remarkably talented men in this city work their way through the storefront scene and move on to the Equity scene because the city wants that. Theater, in general, wants that… So, the Non-Equity community should open their doors to more women. If men can do it, so can women. And, more often than not, allowing a woman to do it makes for a more interesting choice. Who wants boring same-ol’, same-ol’?

The All Girl Project’s mission statement is to provide unique opportunities for Chicago actresses to play roles rarely performed by women. What started this? Why is this a Mammals project?

Bob Fisher: When the Mammals started over a decade ago, I was the sole individual creating content for our productions. The plays always tended to be related to the sorts of content I had immersed myself in as a spectator. I remember hearing from many folks, “The Mammals are fantastic, but why is there only one woman in each show?” For years, I was ambivalent to these inquiries. I thought, “Well there are more boys on stage because I am a boy and I write what I know.” Despite the fact that the shows I wrote were “male heavy,” there were lots of actresses I met or had seen onstage that I wanted to work with, but I didn’t have “traditional” roles in which to cast them. So I started cross-gender casting. First it was casting actresses in supporting roles that were originally written for men, and the first time I did this with a “lead” role, it was Jen Ellison as Henry Jekyll in our critically acclaimed production of “Clay Continent” (a retelling of the Jekyll and Hyde tale).

There were always these questions that seem to appear when you do something like this. Questions like, Can you do that? Is it proper? Aren’t you trying to force something out of the original source material that wasn’t intended? Etc. etc. etc. 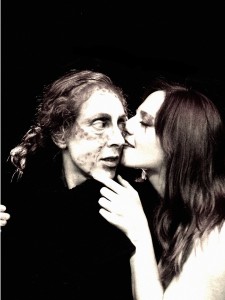 But when did it go from just being a single choice to something specifically with a mission aka “All Girl Project”?

Bob Fisher: We had just completed our Western “Seven Snakes.” There were only two female roles in a show for an ensemble of like fifteen (and one of those female roles was played by a man). People again asked me when were the tables going to turn, when were they going to see more women on our stage. And this time, the question stuck with me longer. At some point I wrote the words “All Girl Moby Dick” on my Facebook status and we decided to go for it!

We choose works with the following criteria: supernatural protagonists or antagonists, part of the canon, a majority of roles that women rarely ever play, “Moby Dick” and “Heart of Darkness” were immediately in. Ahab, the Whale, Kurtz, the River… they fit our requirements perfectly. “Frankenstein” was a little harder to settle on. Whereas the other two were populated entirely with male characters, “Frankenstein” wasn’t. But there were other considerations that enabled us to “break our own rules.” Of the three works, it is the only one written by a woman. And Victor and the Creature certainly were wonderful roles for actresses to tackle.

Both men and women are excited, enthused, or provoked by this project. Seems to me, that means that the work is achieving something wonderful: new experiences and tons of conversation!

Erin Orr: Why did it matter if we are male or female? It doesn’t! Women can be just as rough and tough and crude and lewd as men can… when someone gives them a chance! And that is what The All Girl Project does… It allows women to pull from their guts. Female theatrical characters are often centered in their hearts, heads or loins… rarely in their guts, their innards. But we have guts! We have innards! Let us use them!!! And allowing women to do this, well, that is exactly why it is Mammalian: it’s dark, it’s salacious, it’s edgy, it’s indulgent and it’s telling the story our way. Grounding the emotion in a different place, slightly skewed and enjoying it! 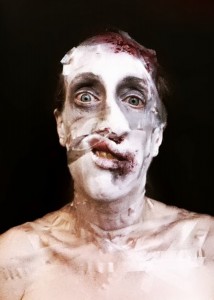 Amy Harmon (managing director for Babes With Blades and the Creature in “All Girl Frankenstein”): Get enough theater artists drunk enough, and they’ll admit to a continued bias against “women’s theater”—both because of the cultural assumption that “women’s issues” are somehow inherently different from/less important than PEOPLE’S issues, and because of the fact that, quite frankly, a lot of theater presented as “women’s theater” simply isn’t very good.

One of the best ways to get audiences to buy the idea that women-as-people can be the focus of a solid, entertaining script—and to get playwrights interested in writing those scripts—is projects like the All Girl one, where actresses get to dive into epic, well-known, seriously meaty male roles and make them their own. It’s frankly subversive from the outside, in that audiences are more or less prevented from latching onto the “just like a woman” bailout. Ahab isn’t hysterical because it’s his time of the month—he’s full-blown, batshit, punch-god-in-the-face crazy. Frankenstein isn’t falling apart because he’s a weak female vessel—he’s being torn apart by the warring forces of creation and destruction.

Women can play the crap out of those parts, and tons of others. Audiences can perceive the truth and depth of those parts whether a male or a female inhabits them. Write more of them for us—for women, sure, but really, for ALL of us.