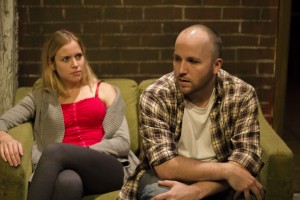 The revised version of Mitch Vermeersch’s “Heist Play” (first staged in 2009) is an ambitious attempt to fold twenty-first-century hipster angst into the shadowy embrace of postwar film noir. Opening to the portentous strains of Miklos Rozsa’s theme music for “Double Indemnity, ” followed by 1940s-style projected titles and credits, director Allison Shoemaker’s production softens the boundaries between stage, cinema and the real-life mean streets of privileged losers. Like the central characters in this play—three thirtyish Chicagoans whose existences consist of chronic drinking, compulsive movie-watching and serial betrayal—we learn that film noir may be a nice place to visit in a darkened theater, but you wouldn’t want to live there.

The trio is trapped in a Bukowskian twilight world, where rent money is as scarce as character and maturity. The mannerisms and motifs of film noir, all toughness and coolness, fill the vacuum of their slack, whiny lives. And so a foiled attempt at a genuine robbery turns into an even more pathetic plan to write a real noir-style screenplay about fake larceny. This would allow them to enter into the pseudo-gritty filmic dreamworld that to them passes for authenticity.

The three leads—Joshua Davis as poor little rich boy Nick, Neal Starbird as the more openly repugnant Tommy and Christine Vrem-Ydstie as Marianne, the eye-catching but self-sabotaging point of the love triangle—are engaging performers who play off one another well. But their small-scale drama of duplicity and disconnection, reminiscent of David Mamet’s “American Buffalo,” gets lost in the thickets of various rambling and convoluted subplots. These involve a murder investigation by detectives Deitrich (Karie Miller) and Tierney (Catherine Bullard), and a gin-guzzling, aphoristic hit man (Mike Steele). In case you were wondering, there’s also an unseen cop named “Widmark.” 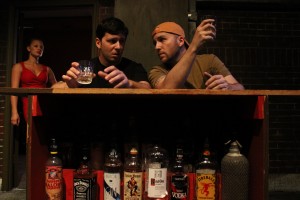 Playwright Vermeersch shows a knack for wise-guy dialogue, as when femme fatale Marianne comments that “watching Tommy be creative is like watching a spider climb out of the toilet.” However, the show suffers from the terrible toos—too many scenes and characters, too much complexity and back-story, too many loose ends and just too many fedoras, even for this hardened film noir fan. What might have worked fine as a tight little multimedia cabaret piece flails and sprawls as a full-scale, too-serious drama.

What’s most disappointing about “Heist Play” is its superficial take on film noir. Nick rightly notes that noir is where “you don’t know what’s gonna happen—but you just know it will be bad.” But there’s a point to classic noir’s unrelenting blackness. As 1940s screenwriter Daniel Fuchs said of one of his ultra-bleak scripts, it was meant to present “a charge to the audience …an appeal not to be brutish.”

Real noir is crisp and dispassionate, never soggy or self-pitying, and its flawed yet still sympathetic (or at least understandable) characters are portrayed against a naturalistic backdrop of a soured American dream. Films of the postwar noir cycle were not always overtly political. However, they were plenty skeptical, sharp-eyed and savvy. The genre is more than a visual or narrative style—it is a vision of modernity, centered on ambiguity and alienation.

“Heist Play” grasps the clichés of film noir, and misses the substance. At the end of “Double Indemnity” or “Out of the Past,” viewers feel emotionally wrung out, but a little bit wiser about who we are and how things work. At the end of “Heist Play,” we just feel puzzled, and a little bit robbed. (Hugh Iglarsh)