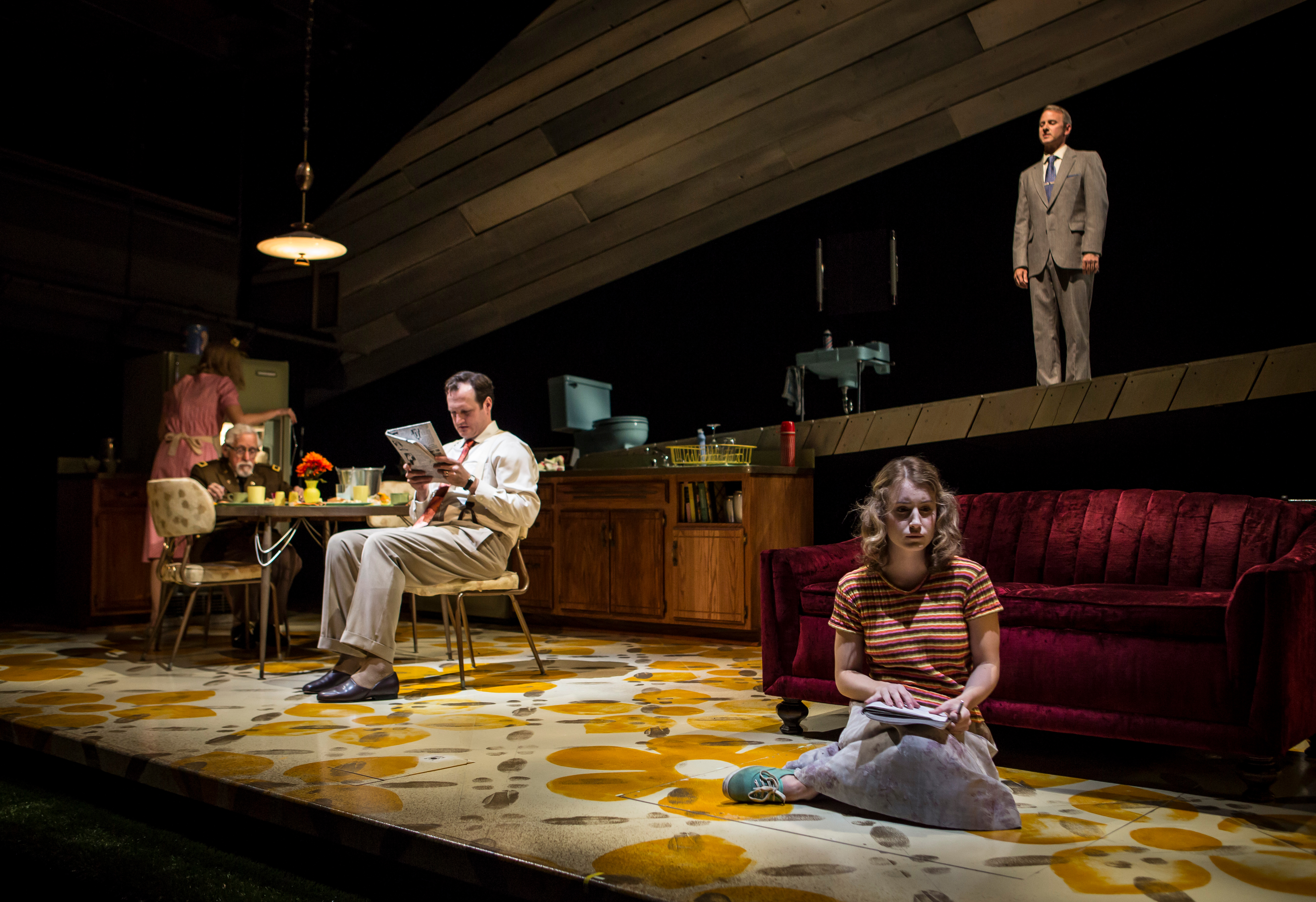 I kept thinking about the story of my parents’ oft-discussed first meeting—at a dance hall in Fargo, North Dakota sometime at the dawn of the JFK era—as I watched one of the best plays of the year, Noah Haidle’s “Smokefall,” in its world premiere at the Goodman earlier this week. And how, if not for a thousand factors of chance, that meeting had not occurred, or had not gone well, and my world, the world of my wife and children, of my brothers and their families—the life that is everything to me and nothing of consequence to most others—does not exist.

An existential scream baked inside a birthday cake, “Smokefall” forces contemplation of the nature of domestic life, and the meaning of life, through a production that commences with a surreal-tinted realism (telegraphed before the curtain by Kevin Depinet’s slightly off-kilter wonder of a set) and progresses through a slightly too-long shtick-driven duo of fraternal twins inside the womb with a predilection for singing Sondheim and into a second act where time, space and generations overlap and blend together. Violet (a sturdy Katherine Keberlein) is pregnant with twins—a surprise coming many years after the birth of their sixteen-year-old named Beauty (the poised yet fragile Catherine Combs), but seems rather cheerful as she keeps home and also tends to her increasingly forgetful father, Colonel (played with astonishing verve by the unstoppable eighty-nine-year-old Mike Nussbaum). But her husband Daniel (the melancholy Eric Slater) will be disappearing for good this day and the pregnancy will reach term and life for all will change forever. (Guy Massey navigates three different roles with skillful dexterity as well.)

Under the capable direction of Anne Kauffman, this very heavy play manages to retain coherence and a strong sense of humor as it churns through the huge themes that pervade such a typically dysfunctional life: the nature of love, of  home, of the urge to wander, of the salve and the wounds of family, of genetic predisposition, of original sin, of survivor’s guilt, and so on. In one of many similarly morose story elements, Beauty, the oldest and for most of her life only (and lonely) child, has stopped speaking entirely and started eating tree bark and drinking paint, all in what appears to be an attempt to somehow atone for the discord of her parents, a burden often disproportionately felt by firstborns.

While narrative enriches the theatergoing experience in the moment, metaphors and imagery captivate the imagination long after the curtain is drawn: “Smokefall” is especially rich with such, including the eternal memory of one romantic moment, the unbroken pinata, the apple tree that becomes the symbol for personal heritage, the beauty that is silent. To coherently draw together so many ideas and narrative threads is to walk a very delicate line between the sublime and the silly; “Smokefall” manages to dance on it. (Brian Hieggelke)