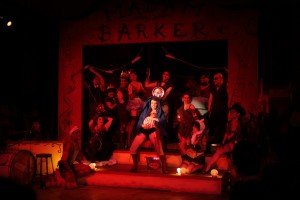 When I reviewed “500 Clown and the Elephant Deal” four years ago, I remember wishing I knew more about Madam Barker, the sexy, charming “vocalist of the apocalypse” the show centered on. This show answers my questions, but knowledge costs mystery. That character was someone you wanted to know better but couldn’t; that was part of the attraction. Maybe some questions are better left unanswered.

In this show, we learn that Madam Barker (Molly Brennan) is the product of an immaculate conception, served as a captain on a whaling ship, and did a stretch of time in Chicago as a bootlegger during Prohibition. She announces that this performance will be her last and refuses to speak of it again to her supporting ensemble. Somewhere in there, she divulges her fear of the real world and touches on the benefits of fantasy versus the slow death of reality. The character has transformed from a sly, blowsy question mark to a peppy yet neurotic force of nature. A Tanqueray-sodden force of nature, but a force of nature nonetheless. I miss Madam Version One; she’s the woman who’d get you drunk on crappy red wine and then sleep with you after a nasty breakup.

The narrative line of Brooke Allen’s script gets a little thin occasionally; the story feels like vaguely connected vignettes based around John Fournier’s insanely catchy cabaret songs. The biographical scenes tell us where the character came from but they don’t really help us to care.

Character misgivings aside, Brennan is a lot of fun. She’s got the timing, the voice and the dancing chops to head the whole mess. It doesn’t hurt that she’s supported by a versatile cast. Cruz Gonzalez-Cadel breaks out a killer voice and appealing concern as the young Olive, who tries to find out what will happen once Madam Barker leaves. The rest of the sparkly, gleefully androgynous ensemble just wants to get on with the show. Standouts include Ricky Harris in a gospel-inflected diva turn and Donnell Williams, who looks far too good in six-inch stilettos. Derek Van Barham’s understated timing is a giggle. The motley crew of fourteen never lets the energy lag. Eric Hoff’s direction maintains the appropriate amount of mess; the steam-punk aesthetic is put to good use. There’s a lot to love here; I just miss the Madam Barker who was allowed to relax. (Lisa Buscani)