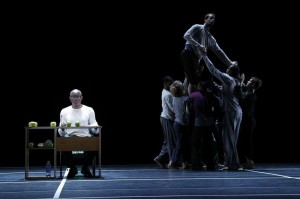 Chance is the incubator for discovery in Bill T. Jones’ 2011 “Story/Time.” Inspired by John Cage’s “Indeterminacy,” in which Cage read one-minute stories to his audience, chosen at random, Jones applied a similar set of restrictions to his own stories, as well as music composed live by Ted Coffey, and dance excerpts from Jones’ thirty years of repertory. The Bill T. Jones/Arnie Zane Dance Company brings “Story/Time” to the Dance Center of Columbia College in October and Jones spoke with me via phone about the piece.

What drew you to Cage’s “Indeterminacy” as a basis for the piece?
I was inspired by John Cage, but he and I are so different I thought it would be an ironic interrogation about his notions of making. Cage’s stories are about music, Eastern philosophy, the life inside his head. I thought what is the life inside Bill T. Jones’ head? John Cage doesn’t write about sex; I do. My experiences of the art world come from my experience as an outsider. So the stories have a very different temperature.

Are all elements—dance, music, narrative—chosen entirely at random?
Our production manager goes to random.org to decide what materials will be presented in what minute of the seventy minutes. The stage is divided in twelve boxes; random.org determines which dancers will be standing in what box and what direction they’re facing in. This piece isn’t trying to give you a sense of a magical burst of creativity; it’s quite intellectual. Now, it’s intellectual, but I’m very emotional. I tell a story about my mother in the 1930s: two black women in the South going from one cotton field to another; two white men in a car pull up and ask to give them a ride. You can imagine the ride. As the men are laughing and talking they’re casually reaching back over the seats and fondling the women’s breasts and reaching between their legs. The women were silently weeping and pushing the little boy they were holding back and forth between them to ward off the hands. That story moves right along to another, no time to absorb it. While the story is going on there is virtuosic dance or maybe something Dadaesque from repertory. Sometimes these mashups are resonant and sometimes they’re dissonant; the audience is trying to make sense out of what they see and hear. I think that was something John Cage was saying: allow yourself to make new connections by getting your taste out of the way.

Does the indeterminacy change your relationship, as a performer, to the material?
Yes, it does. Sometimes I’m telling a story and someone will do something loud next to me. And I have to take a deep breath and say there’s no one way this should be done. See what can be learned from this moment. After all, that’s why you turn to this method—you want to know how to renew, how to find a fresh way of knowing why you’re making the next work. Maybe you don’t need to know why, maybe something gets born without you having to be responsible for it. This is important for a mid-career artist like myself. Maybe you get a little jaded. Maybe a callous grows on the heart and you have to jolt yourself out of habits.

You said in an interview in 2011 that one of the driving questions behind “Story/Time” is why as an artist you do what you do and is it okay to want something from the audience. Is that question still present for you and if so, if it’s changed in any way?
“Story/Time” underlines a notion that I was indoctrinated with when I came into the art world. John Cage thought composition was most important—that the reason for making a work was for the composer to find something new. How it was performed was less important than what the composer was trying to get at. And what the audience gets is less important than the execution even. We were taught as strong artists you tend to not worry about the public; you have to stay true to what you were doing. Now I’m a black man—the first performances I ever saw were entertainers. The only visible black people were there to get a response from the public. Or it was the church, where somebody stands up and the community responds. Those examples are not what high art world told me was valid. So I’ve been asking most of my career what is the truth for me? I need to feel connected. This is the man speaking, not the artist—the man needs to feel that what he does is heard. That it makes a difference to somebody. The artist wants to feel he is tough and a badass—we love the idea of the genius that is so committed to what he does that he doesn’t care what anybody says. Sometimes you have to hold true and the public doesn’t understand and critics certainly don’t understand. Does “Story/Time” get at this? Sometimes people are moved by “Story/Time.” The people who stay for the talk backs; some love the dancing, some love the stories, some feel that something is tailor made for them and they’re right.