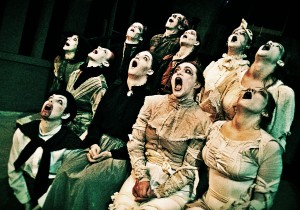 The Chicago Mammal’s “All Girl Frankenstein” is more akin to sculpture, film, dance, performance art or poetry than strictly narrative-based theater. But, as a Rorschach test of an idea filtered through the highly stylized sets, costumes and sound design of the Mammals’ vigorously creative ensemble, “AGF” is a strangely affecting piece of art. And, though the experience is in fact highly theatrical, AGF owes a great debt to film and the notions of manipulating time through editing as well as the stylized and strategic use of sound design.

In fact, “AGF” is not so much an adaption of “Frankenstein” as it is an evisceration, dissection and celebration of particular themes: sex, death, creation, unrequited love, filial and family duty, and yes, prurience, extracted from the original text and then grafted onto other theatrical forms such as commedia dell’arte, dance, film and perhaps even Butoh to create a loose and highly original riff on the seminal Victorian text. Such creative bricolage is a hallmark of what could be considered postmodern. But The Mammals seem far less concerned with classification and more interested in exploring—and even indulging (by their own admission)—what they enjoy, as opposed to creating anything immediately artistically classifiable.

And I’m not quite sure I could classify this if I tried. But I do know that I liked it.

The play opens with an introduction by a Hunchback Resurrectionist (nimbly played in his randy dotage by Liz Chase) promising to deliver a prurient play. And though this sets the audience’s expectations for some salacious revelry, we are quickly disabused of the notion of an easy ride (all puns intended) as the Victorian themes of repression, frustration and discipline are introduced in the form of Victor Frankenstein’s “demanding mother.”

And here it must be stated that the wonderfully gothic set and costume design immediately tugs the production in the direction of art. Brittany Dee Bodley’s lush interpretations of Victorian daywear coupled with the freakishly Burtonesque makeup help create the hysterical, stilted and somewhat torrid world of the family Frankenstein. It’s as if we are watching an animated version of an Edward Gorey illustration crossed with a fall collection of luxuriously chic Victorian children’s clothes. But once Ma Frankenstein’s paddle comes out we know we are in for some seriously over-the-top repression. 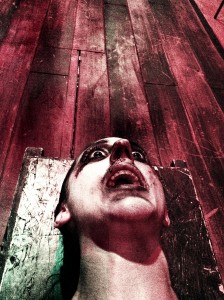 The Family Frankenstein seems to suffer from some oddly heightened tensions and emotions. This allows the actors to run wild with awkwardly primal expressions of id: the children are animal-like and the adults are either afraid of their own instincts or wildly indulgent. Erin Orr’s star turn as Victor Frankenstein’s abject childhood friend, Henry Clerval, is almost more creature-like than the actual Creature itself (aka Frankenstein), while Erin Myers brings a decency and a lucidity to the role of the tortured creator/scientist Victor Frankenstein. It is in her scenes that we are actually allowed to truly enter the narrative.

Loosely based on “Frankenstein” the book, “AGF” follows the Frankenstein story insofar as it bullet-points Victor Frankenstein’s family backstory, and yet it extracts an almost physical bodily-ness from the text itself. This emerges throughout the piece: as Victor and his intended Elizabeth battle their physical impulses towards each other, when Clerval laboriously struggles to express himself and in the Creature’s distressing efforts to walk and ultimately, to love.

The ensemble itself is very focused on the physical. When Clerval tries to animate a female companion for the creature, the four actresses playing the various corpses engage in some masterful and slightly disturbing choreography, emphasizing the bodily-ness of the corpses themselves. And the macabre dance of the Hunchback Resurrectionist at the beginning of Act II is another instance in which the body is featured through the vehicle of the collective ensemble. And so “AGF” is not just about the Frankenstein creation-myth story, it is also about the disturbing elements of the body observed, coveted, manipulated and desired.  And in this sense, “AGF” does deliver the prurience foretold.

But the question is why? There is no clear reason for the emphasis on the at-times disturbing and disrupted sensuality, other than to indicate that this is a world of odd and possibly perverse distortions. But it is indeed a world unto itself. And perhaps this is achievement enough: the creation of a wholly new and imagined (and decidedly exaggerated) landscape.

The play’s beginning scenes are more like stage pictures: quick, pithy and intercut by blackouts. We are meant seemingly to meditate on the featured scene or the final, pithy sentence. And it is this technique that owes a great debt to film editing. It’s not so much a story we are observing here, but extracted sentiments, visual poetry, or curated moments punctuated by the symbolic sound of clocks, thunder, beating wings or the whistle… that terrible whistle.

Film buffs will be reminded of Fritz Lang’s groundbreaking use of the whistle in “M,” or the ominous, incessant clock in Bergman’s “Cries and Whispers.” This layered, careful construction of the gothic world through sound is quite affecting, though it certainly cannot be described as subtle. And that is the madness and the method of the piece itself: it throws a lot at you, visually, aurally, theatrically and thematically, and then allows you to digest it in the slower, less outrageous scenes.

Because it is only later, when the scenes with Victor Frankenstein lengthen, that the play finds its emotional center. Myers’ Frankenstein allows a winsome, and humanizing quality to emerge without effort.  This works as a nice contrast to the rest of the cast’s highly theatrical constructions. Through Victor and Elizabeth we are allowed to breathe for a minute and experience a certain “sensicalness” in an at times “nonsensical” and over-the-top reality.

And what of the intended themes of the original “Frankenstein:” obsession, creation, guilt, responsibility and the notion that even the most terrible monster is deserving of love? These emerge and are explored as Frankenstein and the creature lurch quite literally to their final dramatic confrontation. But “AGF” grafts the morality play with a bit of customized, poetic redemption. And after all the sturm, drang and destruction of the first two acts, this comes as a welcome and poetic relief. (Kaelyn Storme)

Frankenstein is not a Victorian text. The novel was published in 1818. The Victorian era didn’t begin until almost 20 years later, in 1837. Frankenstein is a significant and typical artifact of the Regency era.