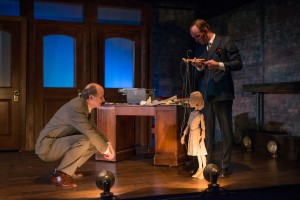 The question before us is compulsion, or to put it another way, obsession. Everyone knows that to accomplish something great, such as creating great art with its attendant elevation of the human consciousness, requires some degree of obsession. A little obsession helps you accomplish great things but too much of it will utterly destroy you, those close to you, and, perhaps most painfully to the afflicted, the very ambitions you set out to pursue in the first place.

This is certainly true in the case of poor Sid Silver, played by Mick Weber in Next Theatre’s production of Rinne Groff’s 2010 play “Compulsion.” Loosely based on Jewish-American writer Meyer Levin, Silver is the first American to discover and alert the world to Anne Frank’s famous diary. Silver befriends Anne’s grieving father Otto and secures his verbal sanction to be a literary agent on his late daughter’s behalf. Silver turns down any fee out of his belief in the importance of publishing the story.

The play begins with him taking it to Doubleday, offering it for publication. A smart young editor, Miss Mermin (Next artistic director Jenny Avery), herself Jewish and the age Anne would have been had she lived, snaps up Silver’s offer. Silver dreams of writing both the book’s introduction and its stage adaptation. His overriding interest, he repeatedly asserts, is preserving the fundamentally Jewish character of Anne’ s story, which he fears will be diluted by the publisher’s desire for mainstream success.

His fears prove correct as the publisher winds up doing an end run around him, securing the adaptation rights from Otto Frank himself. A more “universal” version of the story is ultimately presented onstage, with Anne’s Jewishness deemphasized, enraging Silver. Silver actually launches a lawsuit against Otto Frank, the sole survivor of a murdered family, out of his belief that this important story has been wronged. He descends into paranoia, calling his enemies in the publishing world “Nazis.” 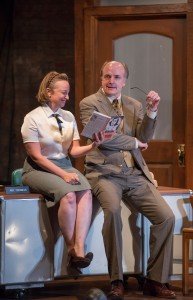 There’s an interesting interplay here between how much of Silver’s rage is truly righteous and how much of it is about his own selfish desire to hitch his wagon to the star of Anne Frank’s incredible story. The play offers no definitive answer to this question, nor should it.

Weber gives a fine performance, as does Avery (who also plays Silver’s wife). There’s an intellectual rapport between Silver and Mermin that borders on romantic tension before their relationship is destroyed by bitter mutual acrimony. Both actors play their relationship with a nice subtlety.

Less successful are the scenes that use puppets to reenact portions of the diary. The implication here appears to be that Anne’s story is being manipulated and exploited by various actors. But this play itself isn’t immune to that. Her most famous words, “In spite of everything I still believe people are really good at heart,” get quoted several times. It’s a moving epiphany, but that epiphany is Anne’s, not Silver’s, nor Groff’s.

I left the theater in tears but not because of anything the playwright, cast or director did, but because of Anne. And “Compulsion” is ultimately little more than a historical curiosity, a footnote in Anne Frank’s story, and it seems a bit hollow to repeat her idealistic words in service of a story that’s ultimately rather cynical. Still, it’s a decent character study. (Rory Leahy)