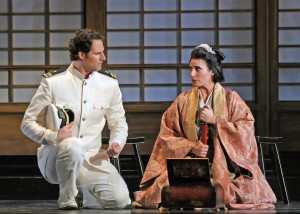 The production, listed as a co-commission of the Houston Grand Opera, the Grand Théâtre de Genève and Lyric Opera, was directed by Grandage in both Houston and Switzerland, but directorial responsibilities have been tossed off to Louisa Muller for the Chicago production.

Hal Prince’s production, first seen here in 1982 and revived several times across the decades, also eventually started coming without Prince, but at least Prince himself directed its initial and earliest incarnations.

I mention this because without our having the opportunity to experience what the original director conceived and wanted firsthand, it is hard to know where Grandage’s work ends and where Muller’s work begins. In any case, Christopher Oram’s elegant yet simple sets and costumes are the same either way.

The Houston production was originally conceived for the Cio-Cio-San role debut of Lyric favorite Ana María Martínez who, ironically, is making her role debut as Desdemona in Verdi’s “Otello” at Lyric concurrently with this “Butterfly.” Thus, the role fell to South African soprano Amanda Echalaz, making her Lyric Opera debut for the fall dates, and to veteran “Butterfly” Patricia Racette, who sang the role at Ravinia and during the last time the Prince production was rolled out in 2009, for the January dates.

From the moment the very tall Echalaz makes her entrance and does not even attempt Butterfly’s high note, it is clear that she is merely going through the motions of being a fifteen-year old. Her love duet with Pinkerton—a dashing James Valenti whose acting is wooden and upper range weak—is harsh, the vocal lines unfocused, the climactic high note of the act forced.

Echalaz has better luck with the dramatic moments of Acts II and III, but one has the sense that she is playing Tosca, i.e., a veteran diva-like Puccini heroine, not the delicacies and naiveté of a spurned child-bride.

Most of the supporting roles are serviceable, some barely, although British baritone Christopher Purves brings more empathy to Sharpless, often a throwaway role, than was ever imaginable, and the non-singing role of Butterfly’s child Sorrow (Tye Oren Pauley) is a true dramatic standout in this production.

Chorus master Michael Black’s female chorus sounds stunningly beautiful and the Lyric Opera Orchestra are lyrical and Italianate in the capable hands of Italian conductor Marco Armiliato, making his Lyric Opera debut and ensuring that some of Puccini’s most sentimental music is never overdone. (Dennis Polkow)