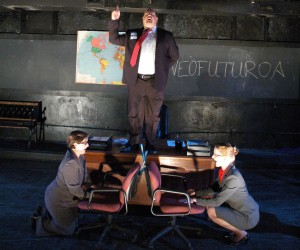 The Neo-Futurists are at it again with their cunning “The Sovereign Statement”—a play wrapped within a spoof tucked within a mimicry of a democratic procedural process. That is to say, “The Sovereign Statement” plays with theatrical and political forms to create a clever deconstruction of audience and constituent expectations, all while demonstrating the follies, pitfalls and urgencies of the democratic “nation-creation” process.

In a sly dramatic twist, Bilal Dardai, the play’s author, begins by demanding that the play’s protagonist, Phil Ridarelli, eat his first stage directions before assuming the role of Chairman of a sovereign nation.  But first, Dardai cleverly asserts that all nations are narratives—stories that we tell ourselves—while the inhabitants are merely a group of people that agree upon a certain set of rules. So why not establish a nation within the Neo-Futurarium itself?

From then on, it’s off to the races or, more accurately, to the process of establishing said “sovereign nation” using audience-determined variables to establish the forms (names, staff, flag, etc.) of said audience-created nation. The feckless (or on this night “humble”)  Chairman Ridarelli, his lethally competent assistants Ellison and Fulcher, and the interchangeable lackeys Manship and Frei midwife the open-ended process, while the audience participates in mock elections and forced, lottery-determined purges.

I won’t spoil the rest of the surprise by revealing the ensuing trajectory, but let’s just say that the form of the deconstruction itself—part “Twilight Zone,” part sketch/spoof of “24” and procedural crime drama—allows for some thought-provoking civics lessons, using the audience as both a foil and a mirror for the discussion of the problematic relationship between ideology and power.

Although the opening-night performance felt a bit hectic and ungainly due to some formal considerations, The Neo-Futurists deliver a full serving of their usual non-narrative, deconstructionist investigations, while the company itself is fully and enjoyably invested in the playful send-up of political forms. Ridarelli is hilariously incompetent as the sovereign nation’s chairman, while the rest of the performers are generous and engaging in their supportive ensemble roles.

Dardai wraps up the heady romp with a poignant personal meditation: born in Pakistan (a nation created in 1947), he now lives as a citizen of the United States. But he is neither wholly “from” nor “of” either country, and it is this very liminal status that allows him to wax philosophical on the privileges and assumptions of nation: creation, democracy, citizenship and home. (Kaelyn Storme)