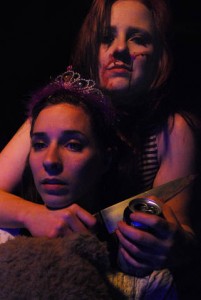 Let’s start with this: I’m not one to make sweeping statements, but “Audience Annihilated Part Two: Gold Star Sticker, ” in all its brief but intense fifteen-minute glory, is easily the scariest play (if that’s what this show could be classified as) I’ve ever attended. I’d like to leave it at that and let you discover the rest for yourself (which any fan of a good, solid scare should do immediately), but perhaps a bit more information is necessary.

There are haunted houses. There are horror plays. And in the twisted space between the two there’s Dream Theatre’s truly disturbing “Audience Annihilated” concept, in which you, the audience member, sit passively in the midst of a terrifying world that rapidly unravels around you. In 2011, with “Audience Annihilated Part One: Women Only Train,” writer/director Jeremy Menekseoglu tested the waters of this haunted house/horror play mashup, creating a world in which an American waiting for a late-night train was sucked into a violent and gory underworld. And while “Part One” was indeed frightening, “Part Two,” in which the concept has been tightened and perfected, is disturbing on a whole other level.

Upon entering the theater space (ten minutes before the show “begins”), you’re directed to have a seat on a small chair in front of a small television in a dingy living room. The flickering screen is showing a horror movie (“Demons 2,” in all its Dario Argento-laced madness on the night I attended). The light from the television is the only light in the room, revealing a mess of empty beer cans, pill bottles and general mess. And here you sit. It’s revealed to you by a chaperone of sorts (Anna Menekseoglu), through subtle hints, that you are a young girl called “Princess,” much too young to be watching this movie alone in the dark. And then the door bursts open and the show really begins.

I’m loathe to reveal more of the story/events after this point in order to retain the heart-thumping uncertainty that audience members are subjected to as the show unfolds, so I’ll leave it there. Suffice it to say that this living room isn’t the only space you’re subjected to and that the cast sells the unfolding scenarios scarily well. There’s Momma (a terrifically reproachful Nicole Roberts), Nose (a wheezing and gaping Amanda Meyer), Guitar (a cackling Menekseoglu, whose seeming kindness hides deeper terrors than Momma’s constant anger) and Bear (a not-so-friendly stuffed animal, expertly puppeteered and voiced by Madelaine Schmitt).

A ticket to watch from the sidelines is also available for those hesitant to be thrust into the middle of the action. But if your heart can stand it, go for the Princess ticket. And try not to wet the bed you get tucked into. (Zach Freeman)