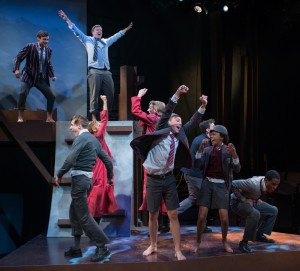 Appearing in 1954 as the debut novel of British author William Golding, “Lord of the Flies” struck a deep chord in the post-World War II era with its chilling Cold War reality check that for all of the threat of civilization being annihilated due to nuclear attack, the real enemy was within.

Just how quickly British school boys go from being cultivated cultural ambassadors to bloodthirsty killers afraid of the dark in the absence of adult supervision has been used as an adult-inflicted morality tale on school-age children for decades. Kudos to the Nigel Williams’ stage adaptation for its faithfulness to a novel where less is often more and to Hypocrites artistic director Halena Kays for a Steppenwolf for Young Adults’ production that encapsulates emotional intensity and casual brutality with disturbing reality.

Yes, most of the performers in the show are in their twenties and some could barely pass for college kids, let alone the prepubescent age of the youth in the novel. That stretch of credibility is made more palpable by how naïve and childlike most of the actors come across in their superb performances. It is also quite effective that there is a sense of decay displayed as time goes on: the clothes the boys arrive in eventually become filthy rags; the pig’s head gradually decomposes and, across time, becomes bone.

The zealousness of the emerging rival group sounds an awful lot like extremists in our own time that emphasize fear-mongering and the glorification of weapons and brutality. The compassionate group talks a better game, to be sure, and yet is no less challenged by having to prove that it can use its power equitably and responsibly as well as practice what it preaches to others.

The moral dilemma of those on the fence—as well as we the audience who identify with their journey—is to weigh immediate gratification versus the larger good and the possibility of the restoration of a wider world that from a child’s perspective, can often seem irrelevant to the game of now. Perhaps the most damning message of “Lord of the Flies,” emphasized quite effectively in this production, is how much an adult world tends to merely impose behaviors on children without bothering to impart the whys behind the behaviors. (Dennis Polkow)