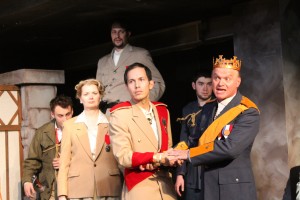 Kudos to newborn Linchpin Theatre for making its debut with Shakespeare’s “King John, ” a play that is about as popular these days as its protagonist. The Victorians loved the work’s pomp and panoply, but the appeal has faded in today’s theater world of small stages, casts and budgets. David Fehr’s solid, well-paced production—set in a World War I universe of French battlefields and pointless destruction—shows what we’ve missed by neglecting this uneven but important history play.

The first half is mesmerizing in its dissection of medieval realpolitik, as English and French monarchs threaten, cajole and scheme for position. The focus of their conflict is John’s imperiled nephew, the young Arthur, Duke of Brittany and pretender to the English throne. He is supported (to a point) by King Philip of France, who wants his own protégé to control England and its wealthy continental possessions. Acted by Janeane Bowlware in one of the play’s several trouser roles, Arthur is a child who plays with action figures, just as the proud and ruthless rulers toy with him.

Further complicating the dynastic entanglement is the smarmy Cardinal Pandulph (Jamie Bragg), who excommunicates John for messing with the Pope. Later, he eggs on the French prince (Nathan Thompson) to invade England and assert his own legally weaker claim to the crown.

It is “The Godfather” in blank verse, with the twelfth-century Plantagenets and Capets differing only in accent and armory from the twentieth-century Corleones. Both willingly sacrifice family ties and humanity on the altar of personal ambition. Underneath the courtly rhetoric of honor and majesty, the motives are those of gangland.

The women bear the emotional weight of this barbarous world, and must live with its crossed loyalties and jolting reversals. Kelly Lynn Hogan is riveting as Lady Constance, mother of Arthur. She realizes the flimsiness of a royal promise when Philip decides that a marriage-backed alliance with England is more lucrative and less risky than a war to make Arthur king. Hogan delivers an emotionally compelling, hair-tearing tirade against this perfidy, as her son is first betrayed by his French protectors and then captured by dear Uncle John, who does not mean him well.

Lady Constance is the conscience of the play, as Falconbridge (played by director and Linchpin cofounder Fehr) is its consciousness. Himself the bastard son of Richard Lionheart, John’s older brother and predecessor, Falconbridge is both active participant and bemused observer of the proceedings. His remarkable Act II riff on “commodity” as the driving force of statecraft is one of Shakespeare’s finest monologues. Fehr nails it, concluding that “Since kings break faith upon commodity,/Gain, be my lord, for I will worship thee!”

John Cabrera does what he can with the title role. Shakespeare’s John is not so much an evil man as a nervously insecure one, who loses focus and force after the death of his mother (the formidable Elinor, played with fierce dignity by Shawna Tucker). John lacks the charisma and perverse charm of Richard III—the monster who enjoys his monstrousness—and comes off more as victim than hero or villain.

As a whole, the play loses steam in the second half, in the absence of its energizing female characters. The fulcrum character is Arthur, who pleads successfully for his life, then dies accidentally while escaping from John’s clutches. John’s end—of poison, or maybe a stomach bug—is similarly underwhelming.

Bad King John is one of those murky figures who does history’s dirty work. His orneriness and greed set him against both Church and nobility, and it is under him that England begins to make baby steps away from feudalism and toward real nationhood. This production captures Shakespeare’s cool and steady-eyed view of what power does to personality in a primitive world ruled more by fickle fate than heroic intention.

The richness of Shakespeare’s language is always a pleasure, but rarely a breeze. If ever a play needed dramaturgical support—i.e., historical and social context—it is this one. The Bard’s audience knew the basic outline, but twenty-first-century viewers do not, and nothing is offered us, not even a scorecard. One hopes that this young and promising troupe, which aspires to outreach and education, moves in the direction of providing essential background material, thus giving backbone to the work and making it accessible and meaningful to its audience. (Hugh Iglarsh)