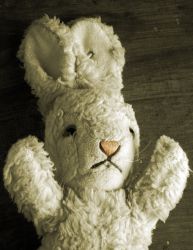 “White Rabbit, Red Rabbit” is a solo piece with no rehearsals, no set and almost no readily available information about it. For its short run of performances at the MCA, co-sponsored by the Chicago Humanities Festival, there are four possible, and very notable, actors lined up for the single role: Usman Ally, Fawzia Mirza, Yasen Peyankov or Michael Shannon. Audience members will have to go to all of the performances to guarantee seeing the one they prefer, because there is no advance notice about who will be going onstage when. In fact, the actors themselves hardly know what is going on.

As Steppenwolf ensemble member Yasen Peyankov bluntly puts it, “I only know what is available through the official website. I will receive written instructions from Mr. Soleimanpour [Nassim Soleimanpour, the play’s creator] a few days before the reading and I will be handed the script when I arrive at MCA the day of my reading. I have no other knowledge of the script and I am not supposed to and I will not contact any of the other performers before my performance.”

So what is this mystery play about? A summary of the only available summary (on the official website) might read “Allegorical animals grapple with the social phenomena of power, obedience and manipulation.” Soleimanpour, who corresponded with me via email, manufactured this play because he was stuck in Iran, literally. By refusing to serve in the military for the required two years of service, Soleimanpour forced himself to do more “important things in his seclusion.”

“In such a situation I started to develop an idea about a play which can travel in time and space,” as he was unable to do. “A play with no rehearsals, no director and no set,” he writes. Much more productive than alternative ways of spending one’s time, and potentially an interesting exercise in civil disobedience. Soleimanpour hopes it doesn’t seem like it’s about Iran. “I just have questions about our simplest social behaviors. I use structures, stories and, of course, my personal life experience to answer these questions or at least to make better ones.” 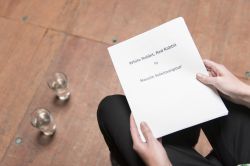 Soleimanpour very pointedly states that he enjoys the mystery and lack of preparation involved in the performing of his play, though it would turn other playwrights into a hopeless wreck. “It’s fun to make mistakes, at least in a play. That’s why rehearsals are more fun than tedious performances of a play.”

Writing about a play that was written with the intention that neither the actors nor the audience know what it is about before they see it is particularly difficult. Because of the necessary uninformed vagueness of my questions, I received some rather repetitive, and even somewhat snarky, answers from those involved. The best of I can glean is this: “White Rabbit, Red Rabbit” asks the big questions.

As described by Chicago Humanities Festival managing director Mary Kate Barley-Jenkins, “As humans, how do we talk around difficult experiences, or dramatize difficult experiences and make them meaningful? How is art perceived in the moment it is revealed to the audience?” And, most importantly to me, why does an audience care about what an individual as a playwright has to say?

Using Soleimanpour’s method, I’ll let his words speak for themselves: “We all have artists inside us. These artists tragically die every minute and we mostly even don’t understand. They are so vulnerable. That’s why it’s always possible to become an artist but almost impossible to be one. Our societies are lost in doubts and lies. We need some honesty. Otherwise we can barely survive.”