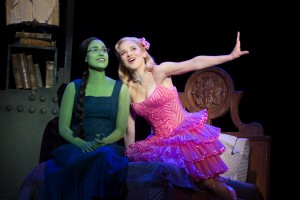 What is it about Chicago and Oz? Is it because L. Frank Baum wrote “The Wonderful Wizard of Oz” while he was living in Chicago? The Midwest ethos of the characters? In any case, Chicago loves “Wicked” so much that after what was to have been an initial six-week run back in 2005, the show was extended to four-and-a-half years when Broadway In Chicago made the decision to create its own Chicago production to meet ticket demand. And even after that record-breaking run, Chicagoans had still not had enough “Wicked,” so the show had a follow-up holiday run—now being repeated to coincide with the show’s tenth anniversary on Broadway. Those who missed what all of the fuss was about get another chance and those who know and love the show get to spend part of their holidays back in Oz.

Part of what makes “Wicked” work so well is its cross-generational appeal. As “wicked” as Elphaba, the Wicked Witch of the West may be perceived to be, she remains a lady when it comes to her language. The archetype that Elphaba and her friend Galinda—later Glinda the Good Witch of the North—are acting out is a relationship as old as the oldest written mythos on record, the ancient Sumerian “Epic of Gilgamesh,” where Gilgamesh and Enkidu begin as rivals but in their attempts to best one another, develop greater respect and even affection for one another as the best of friends. Together, such friends can do anything: a timeless and wonderful message.

Nevertheless, ours remains primarily a patriarchal culture, but in “Wicked” it is two young girls who develop into independent and strong-willed young women who know and get exactly what they want. That one happens to be “green,” as in fill-in-the-blank as to whatever one is that the rest of us may not understand or accept, and you have quite a powerful allegory about differences between us. When Elphaba first arrives in the all-green Emerald City, for instance, she feels strangely at home and expresses that it is the first time in her life that she has not felt “green,” i.e., different. This is a sentiment reminiscent of the “Autobiography of Malcolm X” where Malcolm X writes that when he finally made the Islamic Hajj to Mecca and was simply one among the masses of various races that really were all there as equals, it was the first time in his life that he was not made to be conscious of being black, something he had never experienced before in his life in America. 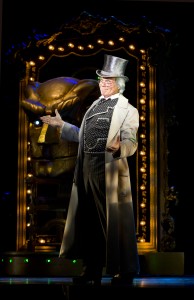 Of course, none of this would matter if the show itself did not unspool in a compelling manner, which it does, nor without an incredibly uplifting—often virtually operatic—score by Broadway veteran Stephen Schwartz that features songs that are character-driven in the best sense and which push the drama forward. Not to mention a spectacular use of stagecraft that includes flying witches and winged monkeys, onstage wizardry and magic. In fact, the initial success of “Wicked,” coinciding with the “Harry Potter” phenomenon is also significant, as “Wicked” indeed offered a live-action feminist alternative world of magic which, judging from the myriads of young girls that still flock to this show en masse, remains a huge part of the attraction.

Unlike many touring productions, nothing has been scaled back on this return visit and the elaborate pre-digital sets are still glorious. The new cast maintains the high quality we have come to expect from this show: it is hard not to be struck by the fact that the chemistry between Elphaba and Glinda is its most important factor. In this case, Jenn Gambatese’s Glinda is a bit less valley girl than her predecessors and Alison Luff’s Elphaba exhibits more vulnerability giving both characterizations more credibility even if you wish that Gambatese would ease off the vibrato in her upper range. John Davidson makes a likable Wizard, but his singing diction, at least on opening night, was a bit muddy. (Dennis Polkow)