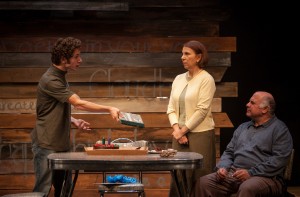 Trying to understand the Holocaust is like staring into the sun, and to dramatize it is to minimize it. Playwright Ron Hirsen’s “Elegy”—now running in a taut, eloquent production at Victory Gardens—succeeds against all odds by coming at the subject obliquely. His pointed seventy-minute script focuses on the after-effects of trauma, showing that the horror is not just in the pain that’s inflicted at the time, but the numbness that follows, draining life and feeling from the world.

Set in New York in the 1970s, with frequent flashbacks to the 1938 state-sponsored pogrom known as Kristallnacht, “Elegy” follows a German-Jewish survivor couple, Hilde (Iris Lieberman) and Helmut (David Wohl), and their troubled twenty-something son, Jerry (Justin Leider). Jerry finds in his parents’ attic a gorgeous German poem written decades ago by his father, who now spends all his time tending the bakery that pays Jerry’s medical school bills. It is inconceivable to Jerry that his gruff, emotionally remote father could once have been a poet and rebel. He realizes that much has been kept from him, and that he does not know this man at all. What he does know is that he can no longer bear the pressure of being his father’s “miracle,” doing his living for him and embodying not just the family’s future, but also its murdered past.

Smothered by the household atmosphere of guilt, fear, rage and resentment, Jerry fixates on the idea of hearing his father read his long-ago poems. In a family frozen and cut off by unspoken grief, trapped in a ghostly limbo of repressed memory, he believes that only the sound of his father’s unfettered voice can set them free. 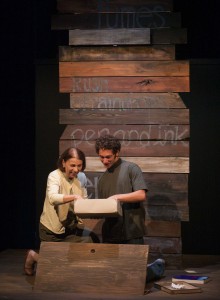 It is a potent premise, finely executed here. Director Dennis Zacek and his design team have created a charged dramatic space, with a porous and perhaps meaningless boundary between is and was. Grant Sabin’s simple set, with a chrome and vinyl dinette poised against stylized death-camp walls, says it all, while Claire Chrzan’s pools of light underscore the sense of fragmentation. Through it all wafts Bill Meyer’s melancholic rendering of Bach’s cello sonatas, evoking the family’s deep and painful connection to German culture. Amid the tension, Bach’s perfection is both elegiac and healing.

Hirsen’s dialogue has its occasional flat patch, but the characters are substantive and well drawn, and Wohl, Lieberman and Leider (along with Bernard Beck as Helmut’s father) do them justice. Leider, making an impressive professional debut, captures the double-bind desperation of a son who must have something from his father, yet cannot ask for it without upsetting his family’s precarious emotional balance.

At one point, Hilde describes her husband as “silent, a butterfly in darkness,” so unlike the youthful, vibrant poet who had once courted her in Berlin. But in order to survive, at least physically, Helmut shuts out the voices of the dead that battered against him in Auschwitz, and withdraws from his own being. The paradox at the heart of this moving and insightful play is that Helmut has to reclaim his own voice before he can hear others, and must mourn himself in order to live. (Hugh Iglarsh)