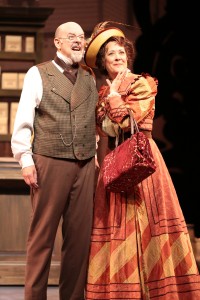 “Hello, Dolly!” is a show that, more often than not, does not work. To be sure, that title song that Louis Armstrong made a huge hit before the cast album even came out is wonderful. Conceived by producer David Merrick after Thornton Wilder’s “The Matchmaker” and assembled by committee, everything about the musical, though, has always felt half-baked. It was a two-dimensional nostalgia show even when it premiered in 1964, two months after the Kennedy assassination. Let’s not forget that the title song was competing with the first wave of Beatlemania and the British Invasion for air play and it offered respite for a grieving nation hungry for an escapist past.

The luckiest thing that ever happened to “Dolly” was Carol Channing, who was not the first choice for the role of Dolly Levi (Ethel Merman was), but Dolly became her baby in a way that no one else has ever been able to make it. Many have sung it better than Channing, to be sure, but the role has always required a unique blend of comic timing, elderly sensuality and larger-than-life charisma that Channing virtually personified. It doesn’t hurt that she was able to make Jerry Herman keep the songs to her own limited vocal range. Dolly has to not only seduce Horace Vandergelder, but the audience as well.

Given the fresh perspective that director and choreographer Rachel Rockwell has brought to so many classic musicals at Drury Lane and elsewhere, it was a good bet that she might be just what was needed to give “Dolly” a welcome facelift. Would that it were so. This is a production that is intensely stilted from the moment the curtain raises. It is easy to blame Tony Award-winning actress Karen Ziemba, who clearly is in search of a characterization and takes the role far too seriously. That is a lethal mistake when the material is this superficial and as ham-driven as this show needs to be: it is dead in the water when the leading lady does not keep her matchmaking attention primarily on the audience.

But given how static so much else is in the show—even the Act II Harmonia Gardens waiter dance sequence comes off as forced—it feels as if Rockwell quite uncharacteristically just has not figured out what this show is all about. Hence, what should be a fun evening really feels like a chore just getting through it. As this was intended as Drury Lane’s big holiday offering, here’s hoping this “Dolly” will be able to put on its Sunday clothes before that parade passes by. (Dennis Polkow)