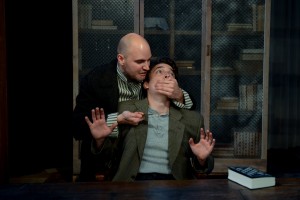 Adaptations are tricky. The choices are endless: what to leave in, what to leave out. The 1861 Charles Dickens novel, which received mixed reviews when first published, remains a popular property for adaptation to stage and screen; a successful West End production ran earlier this year, Mike Newell directed a 2012 feature film and a TV miniseries ran in 2011.

All of them offer pretty much the same narrative: Pip, a young working-class boy, is hired as a playmate for a vain, proud girl by her demented, jilted-at-the-altar guardian. Pip is then selected to become a gentleman by an unknown benefactor. A great story, but no new surprises.

Thankfully, Gale Childs Daly’s approach to the Victorian coming-of-age tale emphasizes class friction that puts Pip’s actions into better context; the audience can better comprehend his motivation if it understands Pip’s shame toward his humble beginnings. The lies and deception characters resort to make sense when it is clear what that era’s poverty means.

Daly also understands the role and richness of the Dickens’ narrative voice. Director Jason Gerace supports her approach with his staging; an open book is never far from the character speaking, a nod to the reader’s theater aspect of the show. The gesture becomes a bit too literal and unnecessary sometimes; Pip struggling with convict Magwitch while holding a book is overkill, but the emphasis on Dickens’ poetry strengthens the piece. Gerace’s blocking makes high-spirited use of the sturdy, utilitarian set. The pacing stays lively with well-choreographed fight scenes, a few musical numbers and a play within a play.

The ensemble switches seamlessly from character to character with the help of a costume piece or prop, and the actors’ distinct, well-drawn portrayals flesh out the story. The performative acting style is tempered at the appropriate moments to great effect; Mike Tepeli, competently anchoring the show as Pip, brings sincere naturalism to the show’s emotional high points. The piece is a challenge the cast is up for, a successful portrayal of the upside and downside of desire. (Lisa Buscani)