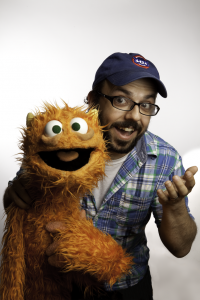 Noah Ginex loves puppets. To paraphrase the great poet Fifty Cent, he loves them like a fat kid loves cake. So it makes sense that for almost twenty years now, Ginex has been all about puppeteering, creating puppets on commission and working with the Jeff Award-nominated puppet company that bears his name (The Noah Ginex Puppet Company) to bring live puppet shows to Chicago.

And though Ginex, who has studied with The Jim Henson Company and coordinated the puppets for the Barenaked Ladies video “Pollywog in a Bog,” loves all kinds of puppet shows, earnest, heartfelt puppet characters are where his heart lies. And his latest creation, a monthly variety show called “Snorf!” that plays in the afternoon at The Playground Theater every fourth Saturday of the month (with dates adjusted in November and December for the holidays), features just those kinds of puppets.

“I wanted to create an actual kid’s show that was smart and sincere and completely genuine,” says Ginex. Sporting an (intentionally) nonsensical acronym (SNORF stands for the Saturday afterNoon mOnster and piggie comedy-vaRiety show! (the F is silent)), it seems like that’s what this latest show is doing. I sat down with Ginex and “Snorf!” director Erica Reid (who is also a producer and writer on “Snorf!”) to talk about their monthly show.

When did “Snorf!” start?
Ginex: We [The Noah Ginex Puppet Company] did a show at the Chicago Improv Festival earlier this year. They had a whole puppet venue. And I had asked Erica to direct that because I feel a lot safer creatively, and just in general, when Erica’s around and also I knew it would be great if Erica directed it.

Reid: Noah’s been creating for years and years and years. So once we had this momentum at the beginning of the year with a successful improv show we said, “What if we took this and made it sketch?” And we know these characters and we know their full stories now because all of the characters in the company have their own backgrounds and character arcs and relationships with the other puppets. So we had this wealth of material that we didn’t want to let just go away. 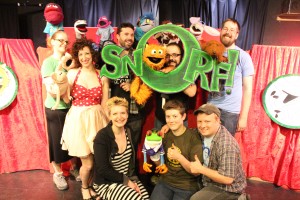 Why an afternoon show?
Reid: The shows that we’d done before were prime time and we couldn’t invite children because we were doing it with Felt [a puppet-based Chicago improv troupe that performs at iO], which is an adult show. So we thought, “Can we turn it into a variety show that we can market for both kids and adults alike?”

Ginex: We wanted to unironically do genuine, grounded, character-based scenes with these puppets, because I had gathered together improvisers and puppeteers who were just good all around. I hadn’t seen just an actual matinee kid’s show that was smart and sincere and completely genuine. And that’s really what we strive for all the time. Even in the improv show.

Reid: We were trying to elevate and celebrate the art of puppeteering.

The “Snorf!” website says it’s “for all ages” and that it’s “not a dumb kiddie show with crayons and blocks.” What does that mean?
Reid: It’s not a kid’s show. It’s not a show that’s targeted for kids, but it is a show that kids definitely appreciate. But it is also very smart and for adults as well. Most of our audiences have been adult so far.

Ginex: I want kids to be able to see it but I want to get as much audience in there as possible. It’s just not my style to work in a restrictive format. I think you can be adult with kids without being filthy. You can just talk to them like normal people. Because they are normal people, they’re just young normal people. 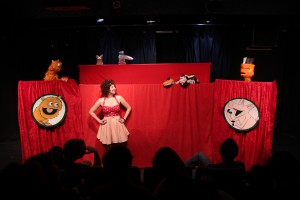 I noticed all the puppets have their own photos and bios.
Ginex: We try and keep everything separated and constant between actors so that the same person plays the same character. That also allows them to know the character more so that they can do interviews as that character and they don’t always have to have something scripted for them.

Reid: And if they’re put in a ridiculous situation they know exactly how that character would handle it.

Ginex: Right. In a regular show you’re not going to see a snake wrestling.

Reid: There’s an instant level of playfulness when you have the puppets because there’s nothing that is out of bounds and it’s automatically going to be fun. Even the dumbest idea, when performed with these puppets, can work.