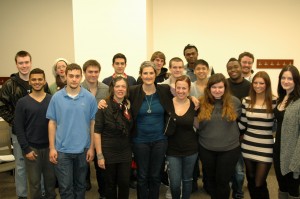 Written by Moises Kaufman and members of the Tectonic Theater Project, “The Laramie Project” is based on a series of interviews surrounding the brutal murder of Matthew Shepard in Laramie, Wyoming in 1998. It’s a tough show for any group of performers, and especially tough for a troupe of students facing a hostile audience. Unfortunately, that’s exactly the type of audience student performers at Ole Miss faced in early October, when a group of students (many of them football players) heckled their production with anti-gay slurs and other disruptions.

A few days after this performance, Carolyn Hoerdemann, an adjunct professor at The Theatre School at DePaul, was checking Facebook on her way to teach her “Performance Workshop for Non-Majors” class when she read about it. Her reaction was immediate: “I decided to change what we were going to do in class that day and talk about this instead.” Hoerdemann first asked her students to read the article and then asked them to break into groups and discuss why it happened and what could be done in response.

“These students are basically in your same class: an introductory, non-major class,” Hoerdemann told her students. “How could they not know that this is inappropriate behavior?” After a short period of time, Hoerdemann’s students had come up with a number of positive actions to take in response. Hoerdemann was surprised to note that “most of them involved somehow supporting the students in the play rather than any kind of disciplinary action against the football players.” 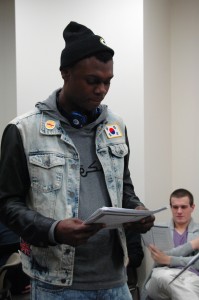 The class created a petition on change.org to raise awareness for gay rights and started organizing a plan to stage a full reading of “The Laramie Project” in the lobby of The Theatre School’s new building, no small task for such an elaborate show. “There are almost seventy characters in this play and I have thirty-two students [in two classes], most of whom have never acted before, that I have to cast,” says Hoerdemann, “but every step of the way I know I’m making the right decision.”

As plans for the production started coming together, a student in Hoerdemann’s class contacted the head of the theater department at Ole Miss to share the change.org petition with the students in the production and almost immediately Garrison Gibbons, the only gay member of the Ole Miss cast, wrote back expressing his gratitude. Hoerdemann quickly invited him to come take part in their production as a guest actor and he accepted, planning to reprise roles that he performed in the Ole Miss production.

At the same time, Hoerdemann sent the petition to the Matthew Shepard Foundation and Laramie Project specialist Susan Burk, an alum of the Theatre School at DePaul, expressed her interest in being a part of the production. In addition, one of Hoerdemann’s classes has a number of DePaul athletes who, along with other students, are planning to lead breakout sessions to discuss other positive actions to prevent issues of intolerance. “It’s exciting to bring these different communities of DePaul together,” says Hoerdemann.

And while this project is shaping up to be a lot bigger than she (or her class) originally anticipated, Hoerdemann feels that it is the perfect lesson for her students to learn about the artistic process and how spontaneous it can be. “I feel like this is one of those times where I took a creative risk and it worked,” she says. “My students could have all said, ‘This is terrible, but let’s get on with it.’ But they didn’t.”

“The Laramie Project” (reading, followed by post-show breakout sessions) will be performed in the lobby of The Theatre School at DePaul, 2350 North Racine, on Monday, November 18 from 6pm-9:30pm.