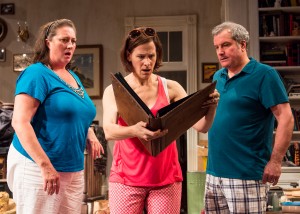 Each new scene in Branden Jacobs-Jenkins’ chronicle of family dysfunction and racism is greeted with the progressively louder sound of cicadas, the insects that rise to the surface to sing, mate and die. If you’ve ever seen the return of the cicadas, it is nature at its ugliest and most overwhelming.

The same can be said for the conduct of the LaFayette family as they gather at their ancestral home to settle their deceased father’s estate. Toni (Kirsten Fitzgerald in full force-of-nature mode) and her over-extended mover/shaker brother Bo (a dismissive and detached Keith Kupferer) bicker over who dropped the financial ball regarding their father’s estate. Their sleepy, airhead brother Franz (Stef Tovar) shows up with his eerily focused tree-hugger girlfriend River (Leah Karpel) for a shot at forgiveness and his share of the profits.

Each family member knows each other’s weaknesses and Jacobs-Jenkins throws new ones into the mix: post-divorce, Toni has become a castrating tank, Bo takes care of his responsibilities by writing checks from afar, and Franz tries to convince people unsuccessfully that he’s learned from his mistakes. Can we pardon a family with flaws like these? The question becomes even more appropriate when the siblings discover a horrible secret about their father that challenges the essence of forgiveness.

The disciplined ensemble presents a high-energy train wreck with impeccable timing. Fitzgerald knows when to let it out and reel it in for maximum effect; Kupferer captures his character’s controlling aspect so well that his subsequent loss of control is painful and poignant. Tovar’s struggle for redemption is believable, as are the suspicions that his efforts to change might not be heartfelt. All siblings keep the audience guessing as to their motivation and goals.