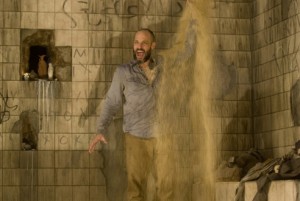 Quite simply, this is one of the great one-man shows. The story is the greatest, oldest ever told—literally, the start of Western civilization is in “An Iliad.” The Chicago actor Timothy Edward Kane is brilliant, nothing short of spectacular. The set design is intriguing, relevant and worthy in relationship to Kane’s high energy blocking with Charles Newell’s subtle and almost subliminal direction. And the fact that this magnetic piece is told at the Court Theatre, the University of Chicago’s theater, within the same blocks as “Iliad” scholars Nick Rudall, the recently passed Herman Sinaiko and James Redfield, makes for a symmetrical commingling of events in this 100-minute retelling through a transcendent, must-see performance.

It goes something like this: the historical event of Troy vs. Greece takes place somewhere around 1250 BCE. Homer’s bardic retelling is around 750 BCE. Plato and the other classic greats use the backdrop of “The Iliad” full-on by 399 BCE. Aristotle defined it as THE epic. Depending on the translation, the poem is more than 15,000 lines, twenty-four books—Homer would recite, sing and chant the piece for the polis in a twenty-four-hour session, or three eight-hour days.  Imagine a fire, the town crowds gathered, maybe a bottle of something being passed around. The oral tradition begun by the poet, to entertain and educate and philosophize.

Playwrights Lisa Peterson and Denis O’Hare (a Northwestern grad who had poetry classes with Reginald Gibbons and stars in HBO’s “True Blood”) capture Homer’s tradition, seeing parallels between the last decade plus of U.S. wars and this classic poem, and have created a timely, abridged, one-man show whose center story holds in Troy vs. Greece, but extends into modernity. There are two great litanies in the story—Kane’s recital of the U.S. cities who have sent troops abroad, and an extended, eyes rolling into the back of his head, exorcism of every major war in man’s history from Troy to Iraq (a rewrite of Homer’s “Catalogue of Ships”). He offers an analogy between road rage or supermarket shopping, when the customer refuses to switch into a faster line because too much time has been spent, to echo the ten-year tireless saga of “The Iliad.” The different stories from “The Iliad” are carefully sliced, the dead boats stuck on the beach of Ilium, Andromache seeing her dead husband’s body from the ramparts, Patroclus’ highly graphic fighting from the ships to his death, Paris’ unique character that pushes the story… “Who cares,” says the Poet. 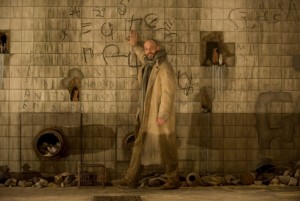 The story, really, is the Poet, the narrator. Timothy Edward Kane follows a strong tradition of one-man shows, from Lenny Bruce, Spaulding Gray, or the more interactive Chicagoan, Marc Kelly Smith. And the fourth-wall is maintained, or at least balanced on a fine line. But unquestionably, the story of Achilles or Troy or the gods takes a second seat to the narrator, the Poet’s own pain: the pain of retelling war, in all of its horror, over the centuries, again and again. And, further, that this incantation has taken its toll on the Poet. Dressed in quasi-desert war fatigues, rocks and rubble, gutters and sand and water (a post-bombed generic setting), the Poet begins to write names and places and dates on the wall in black charcoal, only to forget and offer, “It’s always something, isn’t it.” The landscape of emotion is intense and Kane delivers with a physicality and range that is rare; he is magnificent. He switches voice and tone, playing several characters from several attitudes with a precise, flawless depth. He adds the occasional, unsettled laugh at a contemporary, silly allusion. And he dashes up and down the stairs, incline and ladder—a remarkable performance of Hector to his son and wife from Book VI profits from this set design—even Kane’s careful push of sand down the incline, as a passing of time. Set designer Todd Rosenthal has successfully created a character out of the set.

However, it is such a feverish, highly paced rendering that director Charles Newell has made a questionable choice in peaking at the death of Hector. The rise of conflict within all of the different story lines keeps Kane rising, and rising. But above Hector’s story, the full emotional sweep of Achilles, he whose divine rage starts this epic, is underplayed in resolution. Troy’s King Priam goes to retake the body of his dead warrior son Hector. He traverses enemy encampment, and faces the greatest killing machine the world has ever known, face-to-face, to beg for the body of his most loved child. Kneeling, grabbing the hand of Achilles, Priam says, “I do what no man before me has ever done, to kiss the hand, of the one who has killed his son.” If in the image-laden killing of Hector, Kane delivers an appropriate Hulking smash, he just misses with the needed hugging, postcoital embrace. But this is a minor, debatable misplay, at best.

Charles Newell gets this show mostly right and Kane carries, singularly, on his back, the oldest, most important story ever told with much might. (Mark Roelof Eleveld)