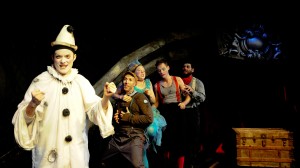 Chicago is notorious for big fires, big shows and lamentation at such horrific circumstances, all of which can be found in Jay Torrence’s “Burning Bluebeard,” which retells the story of the 1903 Chicago Iroquois Theater fire. “Bluebeard” is a new, classic Chicago story now in its second run, with all of the original players, at Theater Wit. “I romanticize artists who die making their art,” says Torrence, a writer and actor in the show. “The terrible tragedy of it—and that the death of the artist is a spectacle itself, happy endings that go wrong.”

On December 30, 1903, the Iroquois Theater (now the site of the Oriental Theatre) in the Loop was playing the clown show “Mr. Bluebeard” (with famous Chicago actor Eddie Foy) as part of a holiday matinee. “There were nine songs before the first scene even began in the original,” says Torrence. It was a Christmas Pantomime, a hybrid of dance, song and storytelling, with clowns, mimes and an aerialist; it was also a fairy tale. And the audience packed in for the performance, with some 2,000 people filling the seats and standing area in the back. Of the 2,000, many were children. “A friend showed me a giant photograph of the Iroquois Theater. I was fascinated,” says Torrence. The afternoon theater fire killed nearly 600, many children. “I began reading about it after I saw the photo,” adds Torrence. “I read about Nellie Reed, the aerialist, who was the only performer who did not survive. She was trapped atop. Most of the information comes from court documents, from audience survivors. Nothing from the clowns.” 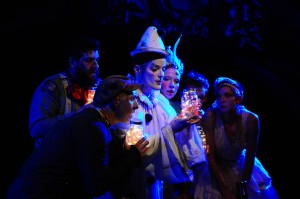 Torrence started writing his adaptation, “Burning Bluebeard,” in 2010. “I started thinking, this beautiful fairy tale—a joyful Christmas show, doing such damage. I wanted to tell the story from the performers’ perspectives. I also wanted to retell it as a happy story, hoping to avoid the fire, writing a eulogy.” Torrence, a native of Ohio, is a twelve-year member of the Neo-Futurists, where the first run played at in 2011. “The show had such an impact that years later I was stopped on the street and asked questions about it,” Torrence amazes.

As Director Halena Kays describes, “We have six clowns in our retelling—it is a funny, holiday eccentric story that balances the fine line between comedy and tragedy.” Both Torrence and Kays emphasize the physicality in this vaudevillian romp, which includes storytelling, clowning, mime, dance, music, acrobatics and “even an Amy Winehouse song.” Ultimately, Kays and the rest of the cast attempt to question tragedy itself—why do bad things happen? Moreover, they pay special attention to the mode in which they retell the story. “We break the fourth wall. We re-imagine it with this original, incredible cast,” says Kays.

Regarding the cast, Kays continues, “Leah [Urzendowski Courser] is our flying girl, she has a physical background; Anthony [Courser] is our strong man, a clown and maybe bad guy; Jay [Torrence] is the heart of the production; Ryan [Walters] is our straight man; Molly [Plunk] is our magical, tall fairy queen; and Dean [Evans] is our actual bad guy, a mime who narrates the story, he always gets talked about the most.” Torrence says he’s always surprised by how much movement is in the show. “Half of the performances are songs, lots of physicality.” There are so many style switches, Kays mentions a comparison to “Waiting for Godot” that offers a magical place swimming in the absurd. 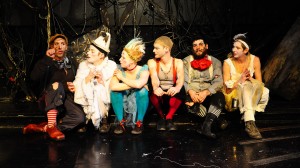 The run at the Neo-Futurists in 2011 offered a different stage space than Theater Wit, one of Kay’ favorite performance spaces. “We made alterations: the ending, arc of the characters, re-imagining the stage. It is even more fantastic, the feats of strength, than the last run.” Torrence credits his time with the Neo-Futurists and “Too Much Light Makes the Baby Go Blind” as influencing his physical storytelling and not being afraid to try new things. “The process of rewriting this, doing a second run, is really interesting. I was surprised at how much my body and mind remembered. It just clicks in rehearsal, and then you remember,” Torrence, also a gymnast for ten years, recounts. “I gave the cast the script three months before we opened last time. It came together, but this [second run] has been such a wonderful luxury. Also, the stage is totally different. We have a whole new scene with a new song for this space.”

On December 30, there is even a 110th-anniversary showing for this run. “Listen, we wouldn’t come back and do this if this piece and this cast weren’t very special,” insists Kays. “This is a Chicago story, covering multiple genres, with a historical event at the center that says very unique things. We are ready to get in the room together, again.”