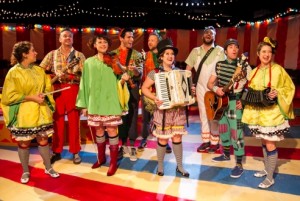 During last Sunday’s unseasonable tornado alert, The Hypocrites inaugurated their holiday season with a fittingly dramatic opening: the remount of their 2012 hit production of “The Mikado.”

It is the reviewer’s great, double-edged privilege to see a show in its early stages, before it has simmered down to a comfortable boil, allowing the flavors to reduce and properly complement each other. And this was the case with “The Mikado.” All the ingredients for last year’s smash hit are probably still there, but the bugs just need to be worked out so that the cast and crew can get settled into the experience.

Gilbert and Sullivan’s “Mikado” is first and foremost a light-opera confection, designed to delight and amuse a willing audience, and it would be an incredibly dedicated Scrooge indeed who wasn’t susceptible to such an exhilarating musical concoction. However, The Hypocrites’ self-designed overture—a guitar and string orchestra of wandering minstrels playing and singing David Byrne and other unfortunate, non-sequitur pop hits—is a special and egregious form of torture, having nothing to do with either the music of Gilbert and Sullivan, nor the ensuing adapted story of the Mikado.

Although this opening is obviously intended as a means to move the audience into the performance space, I found myself extremely uncomfortable and disoriented during this unfortunate musical onslaught, not sure if I had wandered into an Up with People concert or a Mouseketeers convention. And again, it must be asked, what does pop music have to do with the genius of Gilbert and Sullivan, as it pales and withers in comparison to the heady operetta that follows? 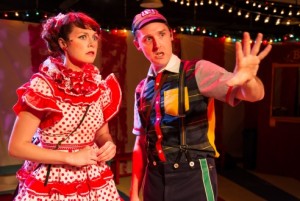 But never mind. If you make it past this regrettable episode, you’re in for a real treat. (Although, I have a feeling that the holiday audiences will be generously sampling the bar, thus thoroughly inoculating themselves against this particular musical disconnect… so on we go!)

The Hypocrites have set their version of “The Mikado” in the strange netherworld of a carnival midway crossed with a three-ring circus. This allows their performers to gambol and stroll like wandering mariachis throughout the sprawling space that is the Steppenwolf Garage. The audience too is encouraged to take ownership of the space, following the actors and action in a bumbling stampede from scene to scene. But, it is possible to just sit back and enjoy the show from the stands, as it were—in a ring of chairs on the perimeter of the space.

One can see how this setup is ripe for audience interaction and performer improvisation, but the Sunday afternoon audience, though willing, was often quite baffled by the peripatetic nature of the events. But in this case it works, or at least it almost works, because the show is designed for maximum audience interaction: from balloon popping, to the walk-about nature of the action, to the in-your-face guitar chorus of the performers. The hope is that the proceedings infect you with a summery version of good cheer during the wintery inevitability of the Christmas holidays.

The performers themselves are a merry band of talented musicians, actors and singers with chops and brio to bang and boot. There were definitely moments of musical magic that hearkened back to the glamour and aplomb of the Gene Kelly or Fred Astaire musicals, not because anyone was dancing particularly, but because of the transcendent nature of the musical qua musical itself. For when a musical hits it right, we all get a little glimpse of a different, more heavenly universe, where problems are sung out in glorious oratorios and tragedies reveal themselves through the depths of a singer’s soulful instrument: the almost unbearably human voice. And that in itself is a sight and sound to behold, not to mention a real theatrical delicacy. 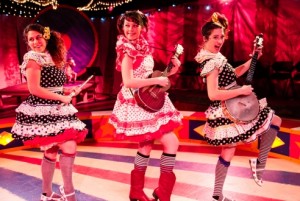 And, when the musical talent is further coordinated with the artfulness of costume design, mise-en-scène and a thoroughly united ensemble, well then it is truly possible to experience theatrical and musical utopia on Earth! In the case of “The Mikado” I caught fleeting glimpses of just such alchemy on its opening afternoon, and thus can confidently predict that as the performers become more comfortable, The Hypocrites’ “Mikado” will yield many more such moments of musical brilliance throughout its Yuletide run. Yet the cast must slow down and savor its words, and allow themselves to really sink into the story. Otherwise the rather frenetic proceedings can err on the side of the incomprehensible and slightly hysterical. But these are mere niggling problems at the beginning of a six-week run.

Shawn Pfautsch, cast as Nanki Poo and Katisha, is a winning and masterful vocal presence. And Emily Casey as Yum Yum and the Mikado is his charismatic and able female counterpart. The always reliable number, “Three Little Maids from School,” is particularly charming due to the deft vocal talents of Dana Omar as Peep-Bo, Christine Stulik as Pitti Sing and Emily Casey as Yum Yum, while supporting cast members Robert McLean as Ko Ko, Matt Kahler as Pooh-Bah and Zeke Sulkes as Pish-Tush round out a talented and disconcertingly youthful musical cast. The ensemble is further completed with supporting musicians to help shepherd the audience and fan the uproarious proceedings.

It’s worthwhile to note that “The Mikado” was originally a sendup of the absurdities and contradictions within the British bureaucracy. Most of this commentary gets lost in the deliriousness and the shuffle of The Hypocrites’ production. But in the end it doesn’t really seem to matter. It’s not political commentary that they are going for here after all. With their version of “The Mikado,” The Hypocrites just want to lay some really great music on you and show you a riotously silly good time. (Kaelyn Storme)