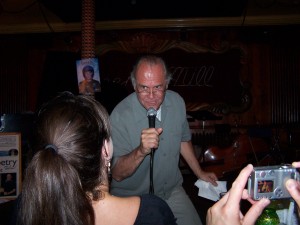 Marc Kelly Smith is one of the most natural, purely comfortable actors on the stage. It’s a joy to see, and it comes across immediately, this intense ease that allows him to dip into his rich palate of emotional engagement and paint a canvas of real human strife—love, regret, sustained longing and anger. He capitalizes on this loudest of emotions in a way that is reminiscent of Timothy Edward Kane’s recent full-throttled portrayal of Hector in “An Iliad.” Smith is in touch with his own brand of divine rage, but in a way that also speaks to the southeast Chicago native in him, where a grandfather, or father perhaps, would lay one too many harsh hands down on the kid. An Archie Bunker (“All in the Family”) with a stick sort of scene. This all comes through in his ninety-minute show, “Flea Market.”

Marc Kelly Smith is a Chicago icon. He is the poetry slam founder who started an international movement. The artist Tony Fitzpatrick introduced him at the Cultural Center a couple of years ago saying, “He has changed the way poetry is understood.” At the Society of Midland Authors last April, Guggenheim chairman and Chicagoan Edward Hirsch leaned into Smith and said, “You’ve created something really beautiful.” Writer Stuart Dybek turned to his novelist son, Nick Dybek, when Smith was recently performing poetry and said, “He’s the best performer.” In one of the great essays written about Smith and the poetry slam, “The Second Throat,” award-winning poet Patricia Smith wrote, “Darting about the theater, his eyes meaningfully manic, Marc Kelly Smith did what he’s always done so masterfully—he dropped like fuel on a fire that, up until then, everyone thought had been contained.” Currently, he runs the longest-running show in Chicago at the Green Mill every Sunday. Because of this, his own art is often left behind. Which is remarkable, because he’s the most talented one in the bunch.

Smith has picked and chosen his stage roles carefully over the years. He was in the loose, improv “Kerouac” performance, he dabbled in avant-garde theater with his productions “The Tattoo Show” and “House Party” and he was even in the Chicago premiere of the wonderful “On the Waterfront.” Recently, he featured part of “Flea Market” at the Phillip Lynch Theatre at Lewis University. In this quasi one-man show, the depth of his ability comes out to play.

The stage is dark, minimal, a card table in front of a flea-market stall. Tone is set immediately—Tim Stafford plays Smith’s able-bodied sideman–and Smith breaks the fourth wall right away. He comes out as the poetry impresario, and sets the audience up for his character change. His informality is its own mask. With a lighthearted wardrobe change, he is off and running as the idiosyncratic, old, crotchety Chicagoan every audience member knows, Stanley, or Cochren, or everyone’s grandpa. He yells at the kid, Stafford. There is a conflict between this older and younger generation. Stanley carries boxes. The old man is waving a knife talking about “Weiner the marketing whiz” who he threatens. There are a lot of threats. There is movement with the boxes, Stanley pulling things out, talking all along, and then a Lionel engine is revealed. And then he takes to the ground, still talking, setting up the rare, wonderful artifact that drives his tortured memories forward. There is a lot of interweaving between the real characters, and artifice, a postmodern skip.

The acts are heartfelt, they speak to universal themes; there are lines that keep resonating thematically. Marc Kelly Smith’s “Flea Market” is expertly acted, with wonderful writing, interesting movement, and spiced up with Stafford’s solid presence. Smith keeps pushing the right buttons, and stays true in his reworking of form in this must-see rendering of generational tales. (Mark Roelof Eleveld)