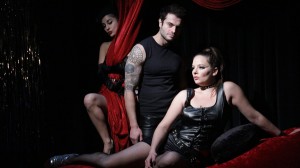 Religion, sex, gender roles, relationships, violence, murder, suffering, xenophobia, shame, war, self-loathing, capitalism: All the best aspects of humanity are on display here as a wide-eyed, pucker-lipped alien named Phoebe Zeitgeist (the petite and rather mesmerizing Simina Contras) sashays around the stage wearing long black gloves, an inquisitive expression and not much else.

Taking place on a set that vaguely resembles some kind of alt-world sex club in the 1970s, this helter-skelter production of enigmatic German playwright Rainer Werner Fassbinder’s “Blood on the Cat’s Neck” offers up multiple slices of life between an array of constantly shifting characters that our alien stand-in absorbs and repeats. (“Your mother is a bitch!” are her first words, uttered roughly halfway through the show.) These seeming non sequiturs mostly involve how generally “rotten” people can be to each other, a word used quite frequently to describe their behavior to each other.

On the page, Fassbinder’s script (translated by Denis Calandra) is somewhat of a downer, lacking a linear narrative or a completely cohesive plot and setting a magnifying glass to our darker impulses. In lesser hands this type of piece can be a disaster of overly dramatic antics and self-indulgent stylings. But, under the direction of artistic director Beata Pilch, this cast of ten, led by Contras, commits themselves to Fassbinder’s twisted world and delivers a seventy-minute show that’s as captivating as it is confounding.

Characters alternately expound on their own emotional turmoil and berate each other for various failings. The Butcher (Carl Wisniewski) condescendingly explains his business acumen and boasts about his high paychecks but just wants a girl with whom he can talk. The Dead Soldier’s Wife (Marzena Bukowska) bemoans her lot in life through forced optimism before suffering worse injustices. And The Girl (Lyndsay Rose Kane) pays lip service to fortitude and self-sufficiency while desperately seeking comfort and support from a man. These characters aren’t distinct people exactly, as the actors shift in and out of vignettes that mostly only last a handful of lines, but they are never caricatures. There’s a humanity about the lack of humanity on display. I told you it’s confounding. Especially when it all descends into the madness of a frantic, frenetic and violent disco party.

When Trap Door produced this show in 1996 it ran for more than six months. This remount is part of their twentieth-anniversary-season celebration and is more fun than a show about a naked alien observing the lowest of human behaviors has any right to be. (Zach Freeman)