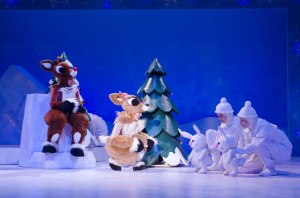 Cross-fertilize Julie Taymor with Rankin and Bass and the result is very much what you get in this live-action version of the famous red-nosed reindeer that actually began life in Chicago as a giveaway storybook for Depression-era kids that visited Santa at Montgomery Ward.

Advertising executive Robert L. May had created the character and story of “Rudolph the Red-Nosed Reindeer” back in 1939, but it was his brother-in-law Johnny Marks who would later write the hit song of the same title that Gene Autry would record and made a No. 1 record a decade later.

Marks would go on to write additional songs for the 1964 stop-action animated television special that forms the basis of this co-production of Emerald City Theatre and the Milwaukee-based First Stage that superbly pays homage to every little detail and nuance of that television special.

From the moment you enter the Broadway Playhouse Theatre, vintage Christmas music is playing and the stage is an impressive three-dimensional recreation of the blue and white North Pole world of the special, complete with snow-trimmed rubber-looking evergreens with old-time ornaments hanging from them.

Although the songs are sung live by the performers, the underscoring is pre-recorded so that the orchestral textures and vintage style of the original special can be preserved. For smaller characters and puppets, kabuki-style puppeteers dressed in white from head to toe to blend in with the environment skillfully operate them.

The script follows the dialogue of the television special and musical numbers of the special virtually verbatim with the additional novelty that many of the elves and reindeer—including Rudolph himself—are performed by alternating casts of talented children.

But most worthwhile about this experience is its message of acceptance and diversity which the cast delivers with verve and cheer. Rudolph generates considerable empathy for first-time live-theater goers: I had two along with me and they loved the show and got the point without being hit over the head with it. All while still being immensely entertained. (Dennis Polkow)